In a video probably recorded on a mobile phone, policemen can be seen taking out goods from a shop and burning them. 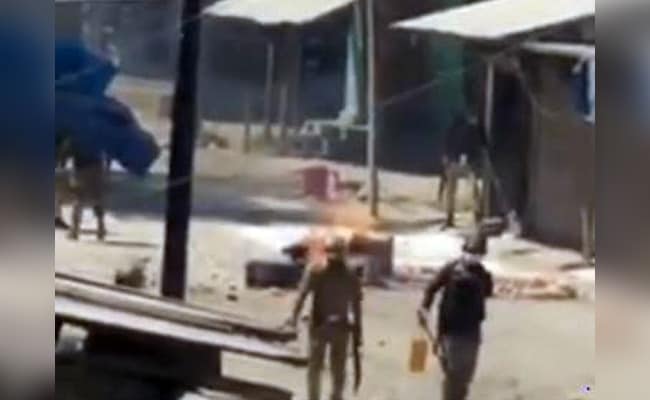 Villagers in Nasrullahpora have alleged harassment by policemen.

Policemen in a village in Jammu and Kashmir were caught on camera damaging shops and houses after one of their senior colleagues was attacked when he tried to stop the Friday prayers last week. The J&K top cop has asked the Budgam Police to submit a report amid allegations of vandalism and harassment by the villagers.

According to the Sarpanch of Nasrullahpora Panchayat- represented by the BJP - many, including those struggling for basics during the pandemic, have been targeted during the recent raids by the police. The vandalism was followed by an attack by some people on a senior cop who was seriously injured, Sarpanch Ghulam Mohammad Dar said. The village is about 11 km away from Srinagar.

"Some men attacked the Deputy Superintendent of Police, Budgam, after he tried to stop the Friday Prayers. He was seriously injured. At around 3 pm on Friday, policemen, accompanied by other security personnel, suddenly reached here in around 40 trucks. They attacked houses and shops," Ghulam Mohammad Dar recalled.

"Those who attacked the police officer should be punished. But see how they (policemen) destroyed the private property here. You must have seen the damage," he added.

The lockdown to tackle the spread of coronavirus began on March 25. Large gatherings - religious, cultural, political and social - are banned as a part of the shutdown.

In a video probably recorded on a mobile phone, policemen can be seen taking out goods from a shop and burning them. Those recording the video were also apparently targeted as seen in the last portion of the clip.

Some villagers have alleged that valuables from their homes and goods from shops were also looted. Dozens of houses and shops have been vandalised; vehicles have been damaged, according to the locals.

A report has been sought from the Budgam Police, said Vijay Kumar, Inspector General of Police, adding that he has seen a clip of alleged vandalism. "I have seen a video clip. I have asked Senior Superintendent of Police, Budgam, to submit a report," he said.

The cops have been raiding the village for the last four days after the attack on the cop on Friday, allege locals.

"They came with hammers and rods and targeted my home. Look around and see... they have destroyed everything," said Shaheena Begam as she showed pieces of glasses, broken furniture, damaged household item scattered on the the kitchen floor and the lawn.

Farooq Ahmad, her neighbour, showed pieces of broken chandeliers lying on the floor at his home. Windows with intricate lattice work were completely destroyed.

The family of Abdul Hamid Bhat, another villager, is inconsolable. Sitting on a pile of broken glasses in the varanda, the women of the house are crying for help. "Whatever the family had built has been destroyed" said Latiefa, his niece.

"I am an orphan. My uncle has been taking care of me and my sister. Now they have destroyed his entire property. How can he feed us?" she asked in a trembling voice.