Sitapur Hate Speech: Police have said a senior officer is investigating the matter and that action will be taken on the basis of facts.

The video is from Sitapur district's Khairabad, about 100 km from UP capital Lucknow

Six days after a Hindu priest's hate speech outside a mosque in Uttar Pradesh's Sitapur district, in which he allegedly threatened to kidnap and rape Muslim women, police have registered a case and are investigating the matter.

A case under relevant sections has been registered and further steps are being taken on the basis of witnesses' statements, Sitapur police said in a statement on Twitter after visuals of the speech sparked outrage and questions on why no action had been taken so far.

The video shows a man clad in saffron robes, reportedly the local mahant in a small town Khairabad -- about 100 km from Lucknow -- addressing a gathering from inside a jeep. A man in a police uniform can also be seen in the background.

Speaking on a microphone, the man appears to make communal and provocative remarks as the crowd cheers him with shouts of "Jai Shri Ram".

The man alleges a plot to murder him and adds that a sum of Rs 28 lakh has been collected for this.

He then purportedly says that if a Muslim harasses any girl in the area, he would kidnap Muslim women and publicly rape them. The threat is met with loud cheers by the crowd.

Another video which is doing the rounds on social media shows four cops in the frame, three of them in the same vehicle as the priest as he delivers the hate speech, raising questions on why an FIR was registered after 6 days and why no further action has been taken yet. 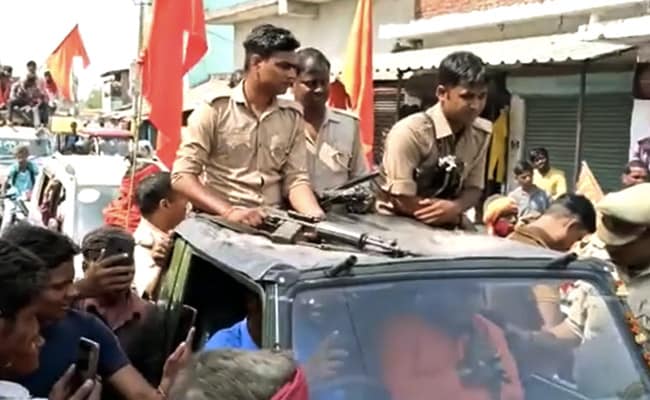 Sharing the video, Mohammed Zubair, co-founder of fact-check website AltNews, said the video was shot on April 2 but no action had been taken by the police even after five days.

Responding to his tweet, Sitapur police said a senior officer is investigating the matter and that action will be taken on the basis of facts.

Following Mr Zubair's post on the video, several Twitter users have called for action against the religious leader, identified by some as "Bajrang Muni". The users have flagged the communal remarks to the UN human rights body and National Commission for Women, seeking strict intervention in the matter.

The National Commission for Women has condemned the remarks and sought the priest's arrest. "The Police should not be a mute spectator in such incidents and appropriate measures must be taken by them to curb people from using such outrageous language for women," a statement from the commission said.