MP Nusrat Jahan, Back Home From Hospital, Says Thanks In Video Message

Nusrat Jahan was admitted to a city-based private hospital after shecomplained of respiratory problems, a statement issued by herfamily said on Monday. 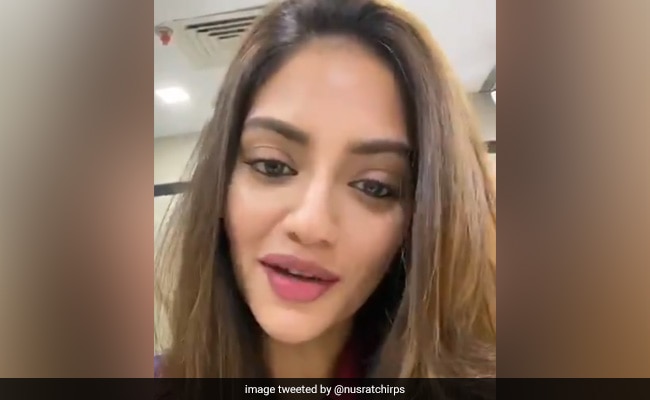 Nusrat Jahan won the Lok Sabha elections from Basirhat by a margin of over three lakh votes.

Trinamool Congress MP Nusrat Jahan, who was admitted to a hospital after asthma attack, on Tuesday posted a thank you message to her well wishers for praying for her recovery. "With all your love and blessings I am feeling absolutely fine and better," the 29-year-old politician says in a 40-second video posted on Twitter.

The MP from Basirhat also promised to visit her constituency and later visit Delhi to attend the Parliament. Ms Jahan has been unanle to attend the ongoing Winter Session of the Parliament which began on Monday, a day after she was admitted to a Kolkata hospital due to respiratory problem.

Thank you all for your wishes, prayers, calls & messages. pic.twitter.com/kTvCGcchEf

However, new agency Press Trust of India, quoting police sources, reported that the lawmaker had taken an overdose of medicine, following which her health condition deteriorated on Sunday night. The report has been denied by her family. A statement released from her family said, "Nusrat was admitted to hospital due to a respiratory issue. She has a history of Asthma... "

Ms Jahan had won the Lok Sabha elections from Basirhat by a margin of over three lakh votes. She married city-based enterpreneur Nikhil Jain in June.

The actor-turned-politician had come in the firing line of Muslim clergy after she was seen sporting "sindoor" (vermilion) while taking oath in the Parliament as the new MP.

The TMC MP had said she represented an inclusive India, which was beyond the barriers of caste, creed and religion.