Nurses Beat Up Doctor Accused Of Molestation In Bihar Hospital

Although a few male staffers tried to shield the doctor, they could not hold up against the enraged nurses. Police said the doctor eventually managed to flee through a rear exit. 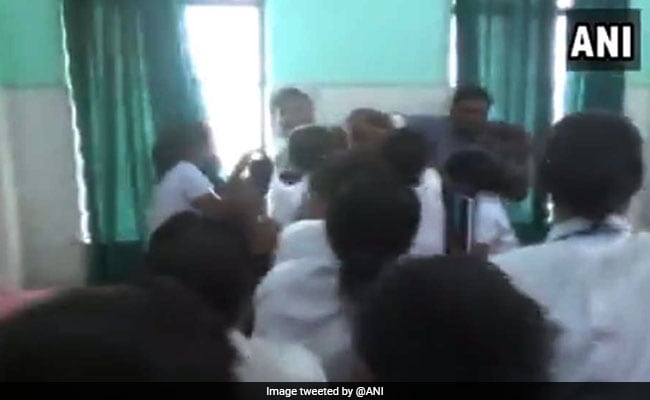 Nurses beat up a doctor accused of molesting a trainee staffer at a Katihar hospital.

A hospital in Bihar's Katihar saw high drama today when a number of nurses assaulted a doctor for allegedly molesting a trainee nurse. A video of the incident, which has gone viral on the social media, showed the nurses of the hospital hitting the accused with slippers while shouting "maro maro" (beat him). The nurses later raised slogans on the hospital premises, seeking an investigation against him.

When reports last came in, police were trying to placate the agitators.

Sources said the nurses initially lodged a complaint with the hospital's civil surgeon, after which the doctor was called in. Tensions rose even as the doctor was being questioned, and the agitating nurses demanded that the hospital authorities hand him over to them.

When the request was denied, they forced their way into his cabin and began assaulting the accused.

Although a few male staffers tried to shield the doctor, they could not hold up against the enraged nurses. Police said the doctor eventually managed to flee through a rear exit.

The National Family Health Survey 4 released by the health ministry showed that every third woman in the country has faced domestic violence of various forms since the age of 15. The most high-profile case of the kind to emerge from Bihar recently involved the repeated sexual assault of 34 girls at a Muzaffarpur children's shelter.