Nuclear Disarmament Can Be Achieved Through Agreed Multilateral Framework: India

Foreign Secretary Harsh Vardhan Shringla said India's approach to nuclear disarmament is encapsulated in its Working Paper submitted to the UN General Assembly First Committee in 2006 and to the Conference on Disarmament in 2007. 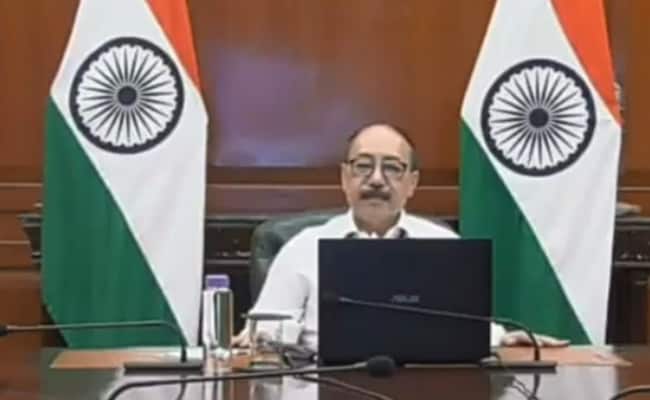 India, which espouses the policy of 'No First Use' against nuclear weapon states, believes that nuclear disarmament can be achieved through agreed multilateral framework and New Delhi is convinced of the need for meaningful dialogue among nations possessing nuclear arms for building trust and confidence, Foreign Secretary Harsh Vardhan Shringla has said.

Addressing the virtual high-level plenary meeting on Friday to commemorate and promote the International Day for the Total Elimination of Nuclear Weapons, Mr Shringla said, "India reiterates its long-standing and unwavering commitment to universal, verifiable and non-discriminatory nuclear disarmament leading to the complete elimination of nuclear weapons, in line with the Final Document of the First Special Session of the UN General Assembly on Disarmament (SSOD-1)."

He said India's approach to nuclear disarmament is encapsulated in its Working Paper submitted to the UN General Assembly First Committee in 2006 and to the Conference on Disarmament in 2007.

"We believe that nuclear disarmament can be achieved through a step-by-step process underwritten by a universal commitment and an agreed multilateral framework. India remains convinced of the need for meaningful dialogue among all States possessing nuclear weapons, for building trust and confidence," Mr Shringla said.

"Without prejudice to the priority attached to nuclear disarmament, India remains committed to the immediate commencement of negotiations on a Fissile Material Cut-off Treaty in the CD," he said, adding, India espouses the policy of No First Use' against nuclear weapon states and non-use against non-nuclear weapon states.

Underlining that India is a key partner in global efforts towards disarmament and strengthening the non-proliferation order, Mr Shringla expressed hope that the high-level event would bring further focus of the international community on the need to mobilise global will towards a nuclear weapons free world.

He said India's annual resolution in the General Assembly on the Convention on the Prohibition of the Use of Nuclear Weapons' tabled since 1982, enjoys wide support and reaffirms that any use of nuclear weapons would be a violation of the UN Charter and a crime against humanity.

Mr Shringla underlined that mindful of the catastrophic consequences of unintentional or accidental use of nuclear weapons, India has since 1998 tabled an annual resolution in the General Assembly on Reducing Nuclear Danger' that calls for immediate and urgent steps to reduce the risks of unintentional and accidental use of nuclear weapons, including through de-alerting and de-targeting.

The high-level event was held on the International Day of Non-violence, which is observed on Mahatma Gandhi's birthday on October 2. It was the final major event of the General Assembly's high level week.

Quoting Mahatma Gandhi, who had said: "Whatever you do will be insignificant, but it is very important that you do it", Mr Shringla asserted that it is in this spirit that India is ready to work with other states towards the achievement of the "noble goal of world free of nuclear weapons".

During the event, UN Secretary General Antonio Guterres said nuclear disarmament has been a priority of the United Nations since the very beginning of the Organisation's existence. Yet 75 years since the founding of the UN and since the horrific bombings at Hiroshima and Nagasaki, the world continues to live in the shadow of nuclear catastrophe.

Some States view nuclear weapons as vital to their national security and survival. Unfortunately, progress towards the total elimination of nuclear weapons has stalled and is at risk of backsliding, he said.

The UN chief said that growing distrust and tension between the states that possess nuclear weapons have increased nuclear risks.

Mr Guterres urged that for the sake of all of our security, the world must return to a common path towards nuclear disarmament. States possessing nuclear weapons have a responsibility to lead this endeavour, including by fulfilling their existing disarmament commitments and by taking practical steps to reduce nuclear risk .

The General Assembly commemorates September 26 as the International Day for the Total Elimination of Nuclear Weapons. This Day provides an occasion for the world community to reaffirm its commitment to global nuclear disarmament as a priority. It provides an opportunity to educate the public - and their leaders - about the real benefits of eliminating such weapons, and the social and economic costs of perpetuating them.

Commemorating this Day at the United Nations is especially important, given its universal membership and its long experience in grappling with nuclear disarmament issues. It is the right place to address one of humanity's greatest challenges; achieving the peace and security of a world without nuclear weapons, the UN said.