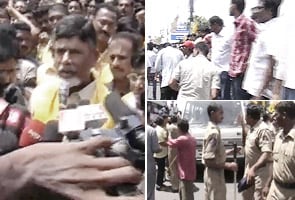 Hyderabad: And then there were five. After the TRS and the BJP, it's the TDP that's backing out of the meeting of eight political parties called by Home Minister P Chidambaram on January 6 to go over the Telangana report.

The meeting is meant to examine the report prepared by the Srikrishna Committee on whether a new state of Telangana should be created.

K Chandrasekhar Rao's TRS which has fronted the campaign for a Telangana state says there's nothing to discuss - it will not accept anything less than complete statehood with Hyderabad as the capital.

The Srikrishna report allegedly does not indicate whether it favours a new state. It lays out options with pros and cons attached. The report will be made public only after Mr Chidambaram meets political parties on Thursday.

The TDP has reportedly been pressured by its leaders from Telangana to appropriate some of the credit being taken by the TRS for leading the crusade for a new state.

In December 2009, the Home Minister made a surprise midnight announcement stating that the process of bifurcating Andhra Pradesh would begin. His declaration was based on the political support guaranteed by different parties in Andhra Pradesh. However, after Mr Chidambaram went public, leaders from the non-Telangana regions of Coastal Andhra and Rayalaseema went on the offensive against their parties, opting for mass resignations against the division of Andhra Pradesh. Parties quickly u-turned, forcing the union government into an awkward corner. In February, the Srikrishna Committee was set up to tour the state and talk to "all sections of society" to evaluate the Telangana-state proposal.
Comments
Telangana reportTDP and Telangana