Not Possible To Go Ahead With SAARC Under Current Circumstances, Says India

The issue of organising the SAARC Summit came up for discussion during a meeting between PM Narendra Modi and his Nepalese counterpart KP Sharma Oli. 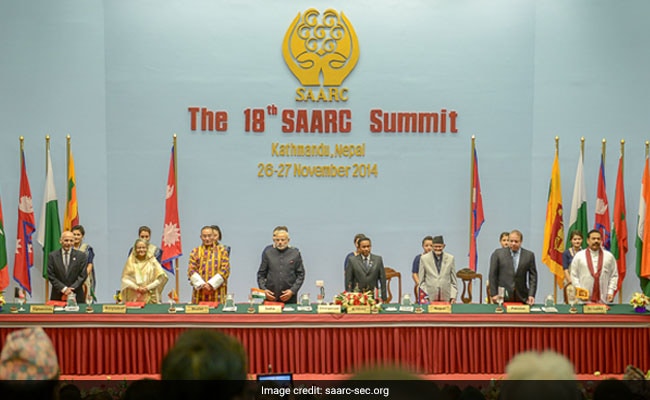 The last SAARC Summit was held in 2014 in Kathmandu, Nepal and was attended by PM Modi

New Delhi: Citing continuing support to cross-border terrorism from Pakistan, India on Saturday said it was difficult to proceed with the South Asian Association of Regional Cooperation (SAARC) initiative under current circumstances.

The issue of organising the SAARC Summit came up for discussion during a meeting between Prime Minister Narendra Modi and his Nepalese counterpart KP Sharma Oli, who is in India on a three-day visit.

"The Prime Minister (Modi) mentioned that he very enthusiastically participated in the Kathmandu (SAARC) summit, but given the current state of play where there is cross-border terrorism - and this is a disruptive force in the region, it is difficult in such circumstances to proceed with such initiatives," Foreign Secretary Vijay Gokhale told reporters.

SAARC Summits are usually held biennially and are hosted by a member state in alphabetical order. The member state hosting the summit assumes the Chair of the Association.

The 2016 SAARC Summit was to be held in Islamabad.

But after the terrorist attack on an Indian Army camp in Uri in Jammu and Kashmir on September 18 that year, India expressed its inability to participate in the summit due to "prevailing circumstances" and stepped up diplomatic pressure on Pakistan. 19 Indian soldiers had died in the attack.

Maldives and Sri Lanka are the seventh and eighth members of the initiative.

Mr Abbasi has also urged Sri Lankan President Maithripala Sirisena "to play his role for early convening of the summit".

"While India is very supportive of all regional connectivity and regional cooperation issues, the views expressed by the Prime Minister (Modi) was Prime Minister Oil was well aware of the circumstances," Mr Gokhale said.

Promoted
Listen to the latest songs, only on JioSaavn.com
The foreign secretary said the Nepalese prime minister told PM Modi he was looking forward to host the Bay of Bengal Initiative for Multi-Sectoral Technical and Economic Cooperation Summit or BIMSTEC this year. BIMSTEC excludes Pakistan.