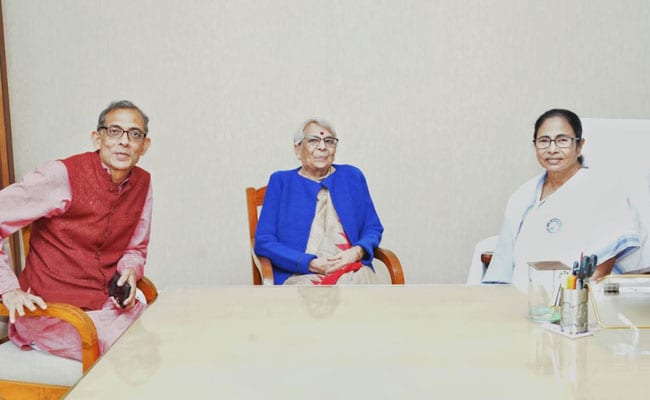 Nobel laureate Abhijit Vinayak Banerjee Tuesday said several schemes run by the Mamata Banerjee government in West Bengal are "interesting" and he will study them before taking a decision on the chief minister's offer to work together.

The nobel laureate, who is from Kolkata, met the chief minister at the state secretariat along with his mother Nirmala Banerjee, also an economist, and held discussion on the government development schemes for the people for nearly an hour, officials said.

Speaking about his meeting with the chief minister, Mr Banerjee said, They (the state government) are giving chances. I will try to work, lets see what can be done. There is no dearth of opportunities here."

"I came here to listen to the West Bengal government about several interesting schemes being implemented in the state. Now I will go back and study about these things and learn more about them (the schemes)," Mr Banerjee told reporters while leaving the state secretariat.

Mr Banerjee, who was awarded the Nobel Prize in 2019 along with two others for "their experimental approach to alleviating global poverty", is one of the directors of Abdul Latif Jameel Poverty Action Lab (J-PAL) which he had founded in 2003.

Mr Banerjee, however, did not take any questions from the journalists on the contentious Citizenship Amendment Act (CAA), the National Population Register (NPR) or the National Register of Citizens (NRC).