The NDRF chief posted on Twitter a moving photo of a little bird rescued after Cyclone Tauktae. Local people have also saved number of parrots and other birds caught in the monster storm 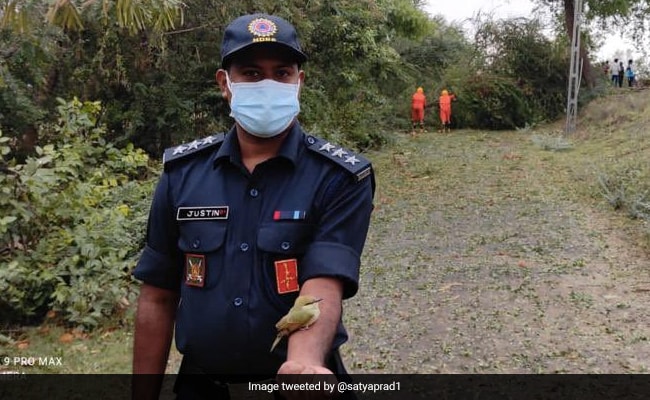 A heart-warming photo of a little bird on the arm of an NDRF personnel was posted on Twitter by Satya Pradhan, the Director General of the National Disaster Response Force. The lovely photo, taken during the rescue operations after Cyclone Tauktae, was posted with #EveryLifeMatters. The chick was displaced from its nest after trees were uprooted and branches broken by the monster cyclone at several places in Gujarat, which bore the brunt of the devastating winds and torrential rain.

🐤All lives matter to @NDRFHQ
🐤A lovely BIRD is saved
🐤 #CycloneTaukte damaged
🐤It's nest on a tree by roadside
🐤Saved and restored
🐤By kind #NDRF rescuer
#EveryLifeMatters#हमज़मीन#नादाँपरिंदेघरआजा🐤 pic.twitter.com/4jrVbSCcOQ

Local people in Amreli rescued a number of parrots and other birds after Cyclone Tauktae passed the area. The rescued birds were kept in a cardboard box in a room at the police station. ''They were given food and later released when situation improved,'' locals were quoted by news agency ANI as saying.

Gujarat: Locals in Amreli rescued parrots & other birds as trees uprooted due to heavy rain & wind as a result of #CycloneTauktae

A local says, "They were kept here in Police lines & provided medical help, food & water. They were released in the evening when situation improved" pic.twitter.com/GIgCgpQedl

NDRF rescue teams have been clearing branches and uprooted trees across roads in Gir, Somnath, Navsari, Bharuch, Bhavnagar, Surendranagar and outskirts of Ahmedabad round the clock since the cyclone struck.

Prime Minister Narendra Modi today reached Bhavnagar to review the situation in Gujarat in the aftermath of Cyclone Tauktae. PM Modi did an an aerial survey of Una, Diu, Jafarabad and Mahuva, an official said.

Thirteen people have killed in Gujarat as Cyclone Tauktae left a trail of destruction along the coast, uprooting electric poles, trees and damaging thousands of houses and roads.