Satara bypoll held last month made headlines after rain-soaked NCP chief Sharad Pawar admitted he made "a mistake" in fielding Udayanraje Bhosale, a descendant of Shivaji Maharaj, from the seat in April-May Lok Sabha polls 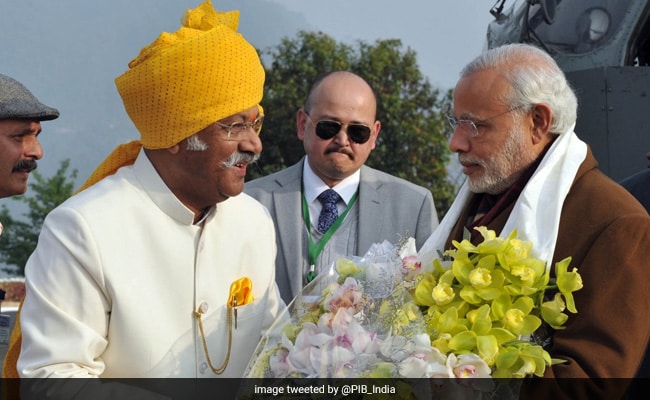 NCP leader Shriniwas Patil took oath as the MP from Maharashtra's Satara today, completing a return to parliament after the Karad seat he held for a decade was scrapped by delimitation. A close aide of party chief Sharad Pawar, Mr Patil, who also served as Governor of Sikkim between 2013 and 2018, defeated the BJP's Udayanraje Bhosale by nearly 90,000 votes in last month's bypoll.

The Satara bypoll was necessitated after Mr Bhosale quit the NCP to join the BJP but failed to win back the seat he surrendered. It was held alongside Assembly elections in the state and made headlines after a rain-soaked Sharad Pawar admitted he made "a mistake" in fielding Mr Bhosale, a descendant of Shivaji Maharaj, from the seat in April-May Lok Sabha polls.

"When one makes a mistake, one should admit it. I made a mistake while selecting candidate for the Lok Sabha poll. I accept this publicly. But I am happy that to correct the mistake, every young and old person in Satara is waiting for October 21," Mr Pawar said in a campaign speech that went viral and won the 78-year-old veteran political leader praise for not stopping despite being drenched by rain.

The bypoll assumed importance after the BJP made it clear it was intent on beating Mr Pawar in his bastion. Prime Minister Narendra Modi addressed a rally there but failed to stop the NCP

Meanwhile, the Shiv Sena has taken this opportunity to launch yet another attack on the BJP. Relations between the two have taken a nosedive since state election results were declared on October 24.

The Sena and the BJP fought the polls together and emerged with 161 seats in the 288-member house but fell out after a bitter dispute over allocation of portfolios and sharing of the Chief Minister's post. The BJP, which emerged as the single-largest party, fell considerably short of the 145-seat majority mark and turned down an invitation to form the government, leading to the Sena opening talks with unlikely allies the Congress and the NCP.

Sena leader Sanjay Raut, who has been his party's face in the fight against the BJP, wrote a column in Shiv Sena mouthpiece Saamana on Sunday, in which he took a dig at Prime Minister Narendra Modi's party over an election campaign that claimed it was the only party "blessed by Shivaji Maharaj".

"The BJP has been campaigning that it is the only party blessed by Shivaji Maharaj. Despite that, BJP candidate Udayanraje Bhosale, lost the Satara Lok Sabha bypoll," Mr Raut wrote.

It was the defeat of a person and not a legacy, the Sena article asserted.

"Whenever people take oath in the name of Shivaji Maharaj but do not keep promises, and start thinking of themselves as rulers of the state, then it is a sign of their downfall," he added.

Sena-BJP ties are set to be tested once again as the Winter Session of Parliament starts today. The BJP's long-time ally has been moved to the opposition benches of the Rajya Sabha and, earlier this month, withdrew its only representative in the Modi government.

Sunday's article came only days after another, also in Saamana, accused the BJP of "horse-trading under the guise of President's Rule" to augment its strength in the house and make a late bid for power.