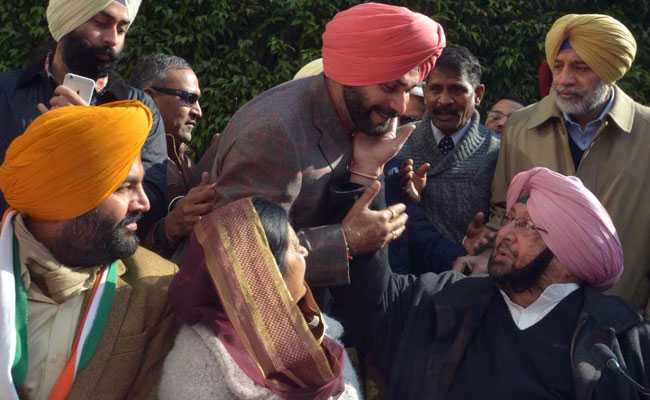 Amid intensified infighting in the Congress' Punjab unit, former state minister Navjot Singh Sidhu on Tuesday fired a fresh salvo against Chief Minister Amarinder Singh, alleging that his party colleagues were being threatened for speaking the truth.

Mr Sidhu's remarks came a day after party legislator Pargat Singh accused Sandeep Sandhu, political advisor to the chief minister, of threatening him for questioning the state government over the sacrilege incidents.

Amarinder Singh and Mr Sidhu have publicly sparred over the probe into the sacrilege issue after the High Court last month quashed an SIT probe report into the 2015 Kotkapura firing incident, in which police had allegedly fired at people protesting the desecration of a religious text in the state.

Mr Sidhu has accused Amarinder Singh of evading responsibility in the sacrilege case.

On Tuesday, he uploaded a video of Pargat Singh's press conference on his Twitter handle.

Ministers, MLAs & MPs raising People's Issues are strengthening the Party, fulfilling their Democratic Duty & exercising their Constitutional Right... But everyone who speaks the truth becomes your enemy. Thus, you threaten your party colleagues, exhibiting your fear & insecurity pic.twitter.com/fiq5klvDWO

Ministers, MLAs & MPs raising People's Issues are strengthening the Party, fulfilling their Democratic Duty & exercising their Constitutional Right... But everyone who speaks the truth becomes your enemy. Thus, you threaten your party colleagues, exhibiting your fear & insecurity, (sic) said Mr Sidhu in a tweet.

However, the Congress on Tuesday said there is no factionalism in its state unit but only diversity of views among the leaders.

Congress spokesperson Supriya Shrinate said the priority of Punjab chief minister is to fight the Covid pandemic and take control over it and not anything else.

"In Punjab, there is diversity of views as there could be differences of opinion between the leaders, but there is no factionalism," Ms Shrinate said when asked about the open war of words between Mr Singh and Mr Sidhu.

Rajya Sabha MPs from Punjab - Pratap Singh Bajwa and Shamsher Singh Dullo -- have also been critical of the chief minister and have raised questions on several decisions and issues of governance in the state.

Mr Bajwa on Tuesday urged Harish Rawat, the in-charge of Punjab affairs at the AICC, to come to Punjab and hold meetings with all legislators to take stock of the political situation.

He also asked CM Amarinder Singh to clarify Pargat Singh's accusation of being threatened by his political adviser.

Pargat Singh, who is close to Mr Sidhu, had said he was ready to face any punishment for speaking the truth and raising issues of sacrilege and review of power purchase agreements.

The latest flashpoint between the chief minister and his rivals in the party has been the state women panel chief threatening to go on a hunger strike to press for action against state minister Charanjit Singh Channi over a case of alleged harassment of an IAS officer.

Former Punjab Congress chief Bajwa claimed 12 MLAs, including five ministers, were present during a meeting on Tuesday at the residence of Mr Channi, who is the state's Technical Education Minister.

Punjab State Women Commission chairperson Manisha Gulati had threatened to go on a hunger strike if the state government failed to apprise her within a week of its stand on the issue of an inappropriate text message allegedly sent by Mr Channi to a woman IAS officer in 2018.

Among those who went to Mr Channi's residence were state minister Sukhjinder Singh Randhawa and Jalandhar Cantonment MLA Pargat Singh.

Throwing his weight behind Mr Channi, Mr Randhawa questioned the commission chairperson for "raking up" the alleged harassment case after more than two years.

In this case, when there is no complaint and raising the issue now is unfortunate, said Mr Randhawa.

Mr Bajwa said Mr Channi called off a press conference scheduled for Tuesday after the intervention of the central party leadership.

To another question, he said the Vigilance Bureau should not be used against party leaders as this may create an explosive situation .

If they try to investigate their own people, then they will face stiff opposition, he said, apparently referring to reports of a Vigilance probe against those considered close to Mr Sidhu and his wife.

Punjab Congress chief Sunil Jakhar on Monday had trashed reports of vigilance probe against party leaders and had asserted there was no truth in it.