Priyanka Gandhi also said there is growing "public anger and pain" for which the people of India will give a message to Prime Minister Narendra Modi on May 23 when the votes for the Lok Sabha polls will be counted. 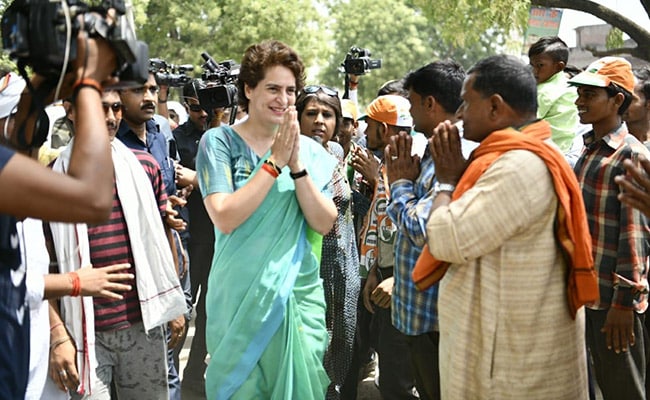 Priyanka Gandhi Vadra has been campaigning in Rae Bareli and Amethi for Congress. (File)

True nationalism is love for the people and the country which means respect and the BJP's narrative is devoid of it, said Congress general secretary Priyanka Gandhi Vadra.

In an exclusive interview to news agency PTI, Priyanka Gandhi also said there is growing "public anger and pain" for which the people of India will give a message to Prime Minister Narendra Modi on May 23 when the votes for the Lok Sabha polls will be counted.

"I believe true nationalism is love of the people and love for the country, which means respect and I do not see respect for the people in anything they are doing," Priyanka Gandhi added.

Ms Gandhi, who has been campaigning in Rae Bareli and Amethi for her mother Sonia Gandhi and brother Rahul Gandhi, respectively, said the PM Modi government's policies have led to large scale public anger and pain among people.

"I think the people will give the message to him (PM) because I think where ever I go, I see a lot of public anger, public pain, which has not been addressed," the Congress general secretary in-charge of eastern Uttar Pradesh said.

"Any leader whether it is him (Modi) or anyone else, if public pain is not addressed, if the voice of the people is drowned by the voice of one leader or by the kind of ideology they have, they will have to suffer the consequences. So I think the people are very clear," she said.

She said the ongoing Lok Sabha elections are very crucial as the Congress is fighting to protect the idea of India and the contest is between ideologies.

"It is an election in which we are fighting for the India that we all love, for democracy, and for all those values of democracy that we hold dear because institutions are being destroyed by this government," she said.

Asked whether she is dejected about not contesting the Lok Sabha polls from Varanasi against PM Modi, Priyanka Gandhi said she "feared no one" and went by the direction of the party.

She said it is important for her to strengthen the party in Uttar Pradesh as she is campaigning not for herself but for the Congress candidates.

Asked what the ongoing elections meant for her personally, considering she and her family have been targeted by the BJP, the Congress leader said, "This is part of BJP's politics."

She said she found BJP's flagship Pradhan Mantri Kisan Samman Nodhi "offensive and insulting" as it was announced on election eve.

"While you (Modi government) have been helping all the big businessmen and waiving their loans, you have pushed the farmers into debt. You have pushed farmers into a situation where 12,000 people are committing suicide for nothing..for just Rs 10,000, or for Rs 2,000 and you have done nothing to help them. And now because the election is coming you think you can fool them by sending Rs 2,000 in their bank accounts. I think it is offensive. It is insulting," Priyanka Gandhi said.