The Shiv Sena-NCP-Congress alliance that is looking to form a government in the state is considering to scrap the bullet train project and withhold Maharashtra's share of expenditure to the Rs 1 lakh crore project, highly placed sources in the Congress told NDTV. 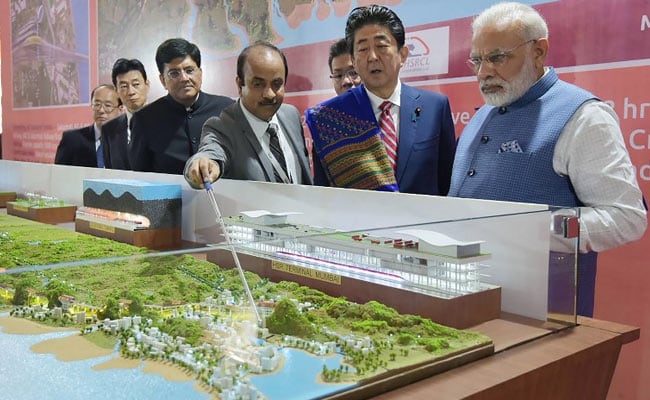 PM Modi and Shinzo Abe had laid the foundation stone for the bullet train project in September 2017.

Prime Minister Narendra Modi's bullet train project between Ahmedabad in Gujarat and Mumbai may be scrapped if the Shiv Sena, the NCP and the Congress take power in Maharashtra.

The Shiv Sena-NCP-Congress alliance that is looking to form a government in the state is considering to scrap India's first bullet train project and withhold Maharashtra's share of expenditure to the Rs 1 lakh crore project, highly placed sources in the Congress told NDTV.

PM Modi and Japanese Prime Minister Shinzo Abe had jointly laid the foundation stone for the bullet train project in Ahmedabad in September 2017. Japan is giving a loan of Rs. 88,000 crore for the project at a minimal interest of 0.1 per cent.

"If the project has to go ahead, the centre should bear all cost of it. Maharashtra won't expend on the bullet train project," a senior Congress leader told NDTV.

Farmers' welfare and a blanket farm loan waiver is also on the cards, the senior Congress leader, requesting anonymity, said.

A senior Nationalist Congress Party (NCP) source told news agency IANS that "during the first meeting of the three parties in Mumbai last week, discussions were held on the Ahmedabad-Mumbai bullet train project in which we informed the leaders that according to central government, the Maharashtra government would be bearing Rs 5,000 crore of the total Rs 1.08 lakh crore cost."

"And then we came to a conclusion that once we form the government in the state then we will inform the Central government that the state government will not bear the cost of the high speed train project and will spend the same money on some other pro-people schemes," he was quoted as saying.

The project for the 508-km Ahmedabad-Mumbai high speed train that will run at a maximum speed of 350 km per hour was slated to be completed by 2023.

The National High Speed Railway Corporation (NHSRCL), which is responsible for the construction, has, till date, acquired over 48 per cent of the land for the project and also floated tenders for several works.

The Shiv Sena, the NCP and the Congress may announce an alliance today to form a government in Maharashtra led by Sena chief Uddhav Thackeray, after a series of meetings in Mumbai. The alliance will call itself the "Maharashtra Vikas Aghadi (Maharashtra development front)". The new government is likely to be in place by early December.