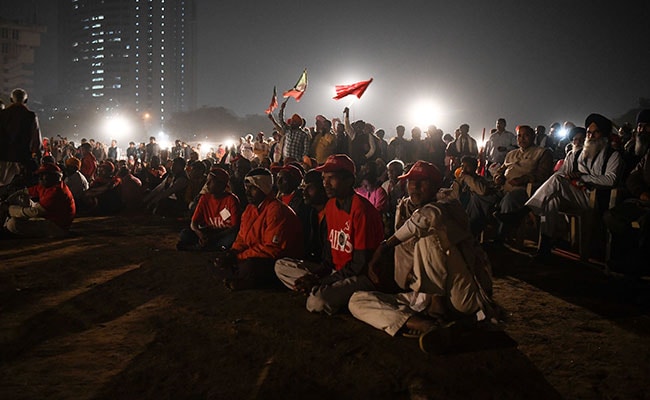 Among the thousands of farmers who descended in Delhi from across the country Thursday for the 'Kisan March' on agrarian crises, were also people from Maharashtra's Palghar town who wanted to save their land, which is likely to be acquired for the bullet train project.

The train, expected to cover the distance of over 500 km between the two cities in less than three hours, is scheduled to run by August 15, 2022 to mark India's 75th year of Independence.

Kakde Thapar, 45, from the same taluka, said the bullet train is planned to go past her Komgaon village and if that happens, two acre of her land would also be gone.

Ms Thapar, who has eight children, said her family of 10 lives off the rice and the vegetables her husband grows in their land. The family consumes most of it and the remaining is sold in the village, she said.

"What will I do with the money, where would I go with it? If we are left with our land, we may do something with it, the money would perish soon," she told PTI.

Around 150 people, including women, under the banner of All India Kisan Sabha from Palghar, which has a population of around 30 lakh, have pitched tents at New Delhi's Ramlila Ground for the Kisan March.

A retired plumber, HD Karbad, is apprehensive of the government keeping its promise on the compensation to locals who would lose land.

"They are assuring jobs and monetary compensation, but I doubt. Even tribals will lose their land," said 62-year-old Karbad, from Dhamangaon.

Asked why she's resisting giving up her land when the government is offering compensation, Mangli Laxmankom, 40, said people in her village Kompada, do not want the money, neither are they willing to give up their land.

"Officials looking after the bullet train project have come to our village but people are reluctant," she claimed.

Several of these people had also participated in the mega farmers' rally in Mumbai in March this year over their demands of a complete waiver on farm loans and fair prices for their produce, among others.

"They had promised to fulfil the demands in three months but that has not happened," said Chandrakant Raghu Gorkhana, 43, from Palghar's Dahanu taluka.

"Farmers from various parts of the country have come together, I think, this would at least make the government consider our case," he said.

Mr Gorkhana claimed that when the Surya dam was constructed in the Dahanu taluka of Palghar town several locals had to be rehabilitated but that has not happened so far.

"When that has not happened, how are they going to rehabilitate us?" Mr Gorkhana, who rents power generators and supplies labourers locally for a living, asked.

In the Marathi crowd, there was also 79-year-old Sundar Narayan Rusi from Gholwad village.

"She has come to support us. Cold doesn't matter to her, she cares more about our issues," one of the women chirped.

Hoping to make themselves heard in the power centre of the nation, thousands of farmers from across the country converged in New Delhi on Thursday for a two-day protest to press for their demands, including debt relief and remunerative prices for their produce.