One of the founding members of the Trinamool Congress, Mukul Roy quit in October 2017 after differences with Chief Minister Mamata Banerjee. 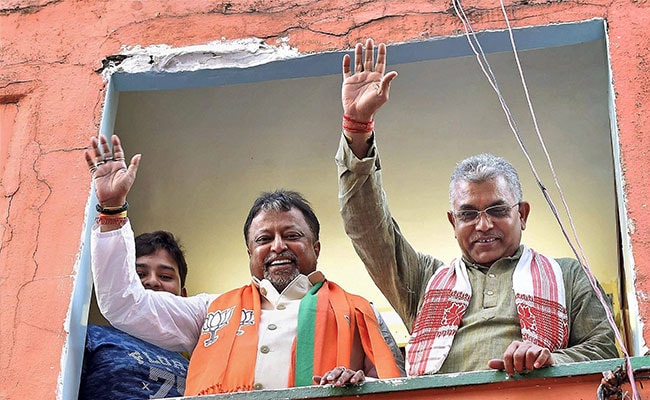 BJP leader Mukul Roy has just been promoted. From an ordinary member of the national executive of the Bharatiya Janata Party, Mr Roy has been promoted to the post of National Vice President by party chief JP Nadda.

Mukul Roy's rise in the BJP hierarchy comes just ahead of the West Bengal assembly elections in 2021, amid speculations that he was in talks with his former party, the Trinamool Congress, and even contemplating a return.

One of the founding members of the Trinamool Congress, Mr Roy quit in October 2017 after differences with Chief Minister Mamata Banerjee.

Thanking JP Nadda, Prime Minister Narendra Modi and Home Minister Amit Shah for reposing their trust in him, Mr Roy said, "The West Bengal elections are due in March-April next year and along with state president Dilip Ghosh and others, I will try to ensure a BJP victory in Bengal."

In recent weeks, there have been reports of Dilip Ghosh and Mukul Roy falling out a party meeting in Delhi during discussions over poll strategy and prospects.

Mr Roy mentioning Dilip Ghosh in his first reaction to his new appointment is being viewed as significant.

Mukul Roy's son Subhrangshu who is a Trinamool MLA from Bijpur, joined the BJP in May last year, after being suspended by Mamata Banerjee.

Another former Trinamool MP Anupam Hazra has also been promoted. He is now National Secretary of BJP. Mr Hazra was the Trinamool MP from Bolpur before he joined the BJP and contested unsuccessfully in 2019 from the prestigious Jadavpur seat in Kolkata. He lost to Trinamool's Mimi Chakraborty.