The opposition party's communications in-charge Randeep Singh Surjewala alleged that having failed to meet its pre-poll promise of doubling farmers' incomes, BJP and its allies were trying to "hoodwink" the people. 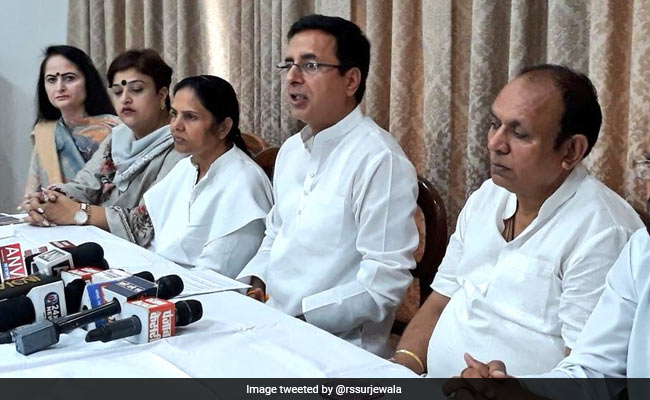 Days after the Centre hiked the MSP of 14 kharif crops, the Congress on Monday accused the NDA government of using "fake facts" to claim farmers would be given the promised cost plus fifty per cent profit and challenged Prime Minister Narendra Modi for an open debate on agricultural issues.

The opposition party's communications in-charge Randeep Singh Surjewala alleged that having failed to meet its pre-poll promise of doubling farmers' incomes, BJP and its allies were trying to "hoodwink" the people.

"Staring at an imminent defeat, the Modi government has attempted to disguise the MSP announcement of July, 4, 2018 as an electoral lollipop for credit seeking and duping the farmers," Mr Surjewala said at a press conference in Chandigarh.

Haryana Chief Minister Manohar Lal Khattar and state Agriculture Minister OP Dhankar went to the extent of dancing on these "lies" while Shiromani Akali Dal (Badal) has announced a thanksgiving rally in Malout in Punjab on July 11 to be addressed by the prime minister, Mr Surjewala said.

"Fake-congratulatory publicity" and "false-drum beating", can manage headlines but not provide relief to the farmers, he added.

We challenge the prime minister and the Union agriculture minister for an "open debate" on MSP and other farmer issues, Mr Surjewala said.

He said the Congress will present all facts and expose the government's claims. Congress will also raise this issue before the Parliament, he added.

Mr Surjewala said that had the Modi government given cost plus 50 per cent profit in real terms in the past four years, farmers would have earned an additional Rs 2 lakh crore.

But Modiji and BJP will not tell this to the nation, he said.

Mr Surjewala sought to know if the increase in input costs like fertilisers, pesticides, diesel, farm equipment etc were factored in the MSP hike.

"No one is disputing there has been an increase in MSP, so just say you have increased the MSP. However, don't hoodwink or mislead and present fake facts to say you have given cost plus 50 per cent profit," he said.

For the first time, there is GST on fertilisers, tractors, on farm equipment, on pesticides and agri-indebtedness has not been addressed at all, he said.

"Why is Modi government shying away from waiving crop loans of small and marginal farmers? When loans of dozen-odd industrialists amounting to Rs 2.41 lakh crore can be waived, why not of the farmers of this country?" he asked.

Mr Surjewala demanded that Prime Minister Modi answer these questions when he addresses the Malout rally being organised by his ally Shiromani Akali Dal.

"Falsehood and betrayal has become DNA of the BJP," he alleged. Mr Surjewala claimed that 78 per cent recommendations of the Swaminathan Commission were implemented during UPA regime.

Attacking the NDA dispensation further, Mr Surjewala said "the same Modi government had in February 2015 said in an affidavit before Supreme Court that cost plus 50 per cent profit cannot be given to farmers as it will distort the markets".

On the BJP's promise to double farmers income by 2022, Mr Surjewala said for that, "you need a growth rate both in support price as also procurement of close to 15 per cent. Dalwai committee has been constituted, which has submitted a report, according to which current CAGR is 2.5 per cent and the required CAGR is 10.4 per cent."

So there is no way the prime minister will fulfil his promise of doubling farmers income, the Congress leader said.

He claimed that staring at an imminent defeat, the BJP was now looking to prepone the Lok Sabha polls.

The Congress communications in-charge said people could not live just on 'jumlas' (rhetoric) and alleged the government had failed on various fronts including creating jobs, bringing back black money and on the promise of 'minimum government, maximum governance'.

"The Modi government collected a huge amount of Rs 19,800 crore in 2016-17 and 2017-18 by way of Krishi Kalyan Cess, which was used for Crop Insurance Scheme. The private insurance companies have earned Rs 14,828 crore from this Crop Insurance scheme, while farmers earned a meagre Rs 5,650 crore as compensation," he said.

He also claimed that agri exports have plunged and imports from foreign countries have surged.