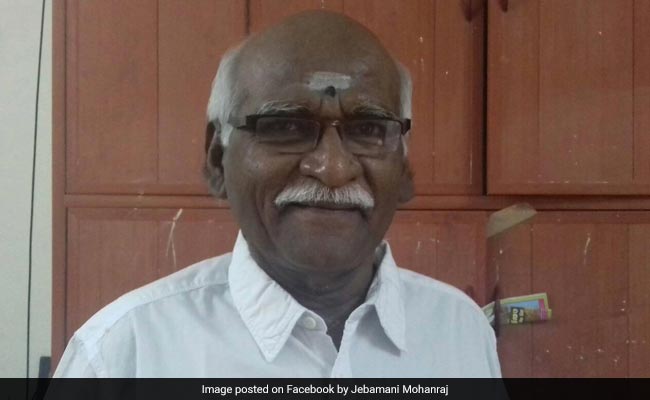 Mohanraj Jebamani, 67, could well be the richest candidate ever in India. The retired police officer has declared Rs 1.76 lakh crore as cash in hand a debt of Rs 4 lakh crore from the World Bank in his affidavit for the by-polls to the Perambur assembly constituency in Tamil Nadu.

The figures, which sarcastically refer to the notional value of 2G scam and the debt burden of the Tamil Nadu government, is Mohanraj Jebamani's attempting to "draw attention to three issues - candidates lying about their assets in electoral affidavits, shabby investigation, and poor governance in the state."

Living in a modest home at Chennai's Raja Annamalaipuram, Mohanraj Jebamani spoke to NDTV about his years as an investigative officer in the police department. "I managed to convict a Railway Station Master who took Rs 5 as bribe. But in 2G case the CBI had done a pathetic job. The guilty went scot-free though there was loss of Rs 1.76 lakh crore loss,"alleged the former police officer.

He believes that the rich and high profile candidates hide their wealth even though they file affidavits. "Only because of bad governance over the years Tamil Nadu has Rs 4 lakh crore debt," claimed Mohanraj Jebamani.

The Returning Officer has accepted his nomination and has allotted him a green chili symbol.

After debate on social media over the acceptance of his nomination, Election Commissioner Ashok Lavasa clarified that the Returning Officer's job is only to verify if all details have been furnished and not getting into the veracity of it.

This is the seventh time Mohanraj Jebamani is contesting and second time he has furnished 'cooked up' details on assets. Justifying his actions, former police officer said, "Public who read about me should come forward and help."