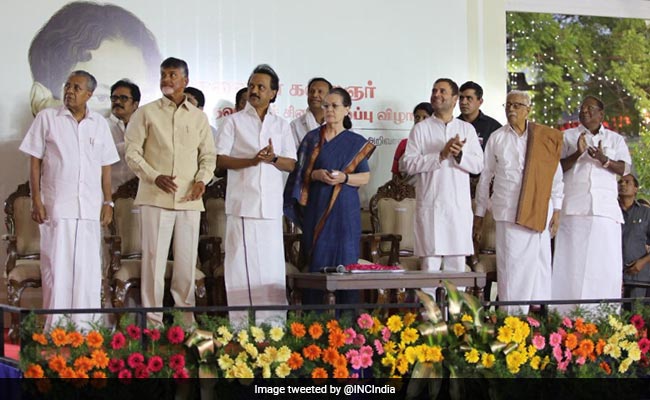 MK Stalin's DMK has been one of the most reliable allies of the Congress over the past few years.

"I extend my hearty greetings to respected Annai (mother) Sonia Gandhi," he said in a Facebook post. Congress leaders in Tamil Nadu usually refer Sonia Gandhi as "Annai Sonia" as a mark of respect.

Mr Stalin said "no power" can remove the Congress party's "excellent work" from the hearts of the Indian people.

The Dravidian party chief said Congress was the "permanent guarantee for pluralism, secularism, social justice and equality enshrined in the constitution".

Also, the poor, middle-class and marginalised sections continued to believe in the Congress, he said.

The DMK has been one of the most reliable allies of the Congress in the last few years. It was MK Stalin who had pitched Rahul Gandhi's name for Prime Minister before the Lok Sabha elections. Though the Congress was crushed by the BJP and its allies in most states in the polls, in Tamil Nadu, the DMK and the Congress won 37 of 38 parliamentary seats.

Sonia Gandhi's name for the Congress Parliamentary Party (CPP) leader, proposed by former prime minister Manmohan Singh, was unanimously endorsed by all party lawmakers. The suspense is now over whom the chairperson names as the leader of the party in parliament - her son Rahul Gandhi, who wants to step down as the party chief, or another member.

At the meeting, Sonia Gandhi thanked the 12.13 crore people who voted for the Congress - pointing out that even in defeat, the party has a sizeable voter base.

In an emotive note, she also thanked Rahul Gandhi "for toiling night and day and taking on the Modi government... raising concerns about all sections of society and helped the party win in Madhya Pradesh and Chhattisgarh and Rajasthan".

As we speak, emotional messages are coming for his continuation (as the party chief). The Congress Working Committee met to deliberate the issue and must take steps," she added.

The parliamentary party meeting was attended by all 52 lawmakers of the Congress from the Lok Sabha as well as its members from the Rajya Sabha.