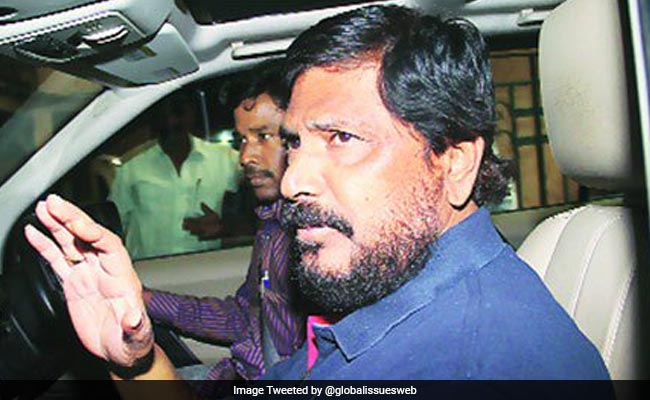 Ramdas Athawale said he will approach PM and will see if amendment can be made for additional quota.

New Delhi: Batting for quota to the poor from general category, Union minister Ramdas Athawale has said the reservation limit should be raised to 75 per cent from existing 50 per cent, giving the additional 25 per cent quota to economically backwards in the general castes.

The Minister of State for Social Justice also said he will approach the Prime Minister in this regard and will see if Constitutional amendment can be made for the additional quota.

Noting that reservation can never be abolished, even if some people are opposed to it, he said he has always demanded reservation for economically backward classes from all castes whether they are Jats in Haryana, Patels in Gujarat, Marathas in Maharashtra or the Brahmins.

"Once this happens there will be no agitation for reservation and I am saying this despite being from Dalit community as there are economically weaker classes in all castes," Mr Athawale added.

For this there should be an additional 25 per cent reservation for economically backward classes in all castes above the present 49.5 per cent mandated in the Constitution, the minister said.

"...economically backward classes in all castes should be given 25 per cent reservation by taking the total reservation level to 75 per cent and keep the remaining 25 per cent open for all. This will resolve all issues of all castes," he said.

However, the RPI(A) chief said the change should be made without tinkering with the current reservation for SCs, STs and OBCs.

"For once we can resolve this issue and it will be good for the development of the nation," he said.

Mr Athawale also suggested that another way to solve the issue was by according reservation on the basis of the respective caste's percentage in the population.

And the remaining 22.8 per cent are getting 50.5 per cent reservation, so another way could be that reservation should be given as per the respective caste's population, he said.

Promoted
Listen to the latest songs, only on JioSaavn.com
At present, according to the Constitution, 15 per cent seats are reserved for SCs, 7.5 per cent for STs and 27 per cent for OBCs in central government-funded higher education institutions and jobs and even in elections.