Surat, a city known for its diamond and textile industries, was witness to two protests by migrant labourers earlier this month. 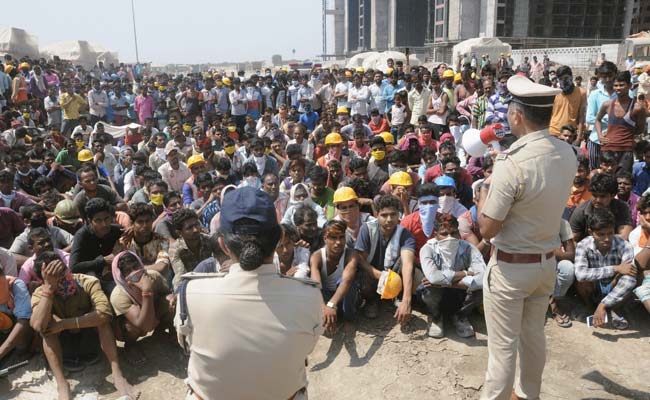 The police had brought the situation under control, asking a local non-profit to arrange for food

Hundreds of labourers held a protest outside the offices of the Diamond Bourse in Surat, alleging that they were made to work amid the countrywide lockdown over coronavirus. Most of the workers, who are migrant labourers, also demanded that they be sent back to their villages, saying they do not have enough to eat.

The police were called in to calm down the mob, but when they came, the people started throwing stones

Surat, a city known for its diamond and textile industries, was witness to two protests by migrant labourers earlier this month.

A violent protest was held on April 10 on the outskirts of Surat. Hundreds of migrant workers hit the street, setting fire to vehicles and handcarts.

The police had brought the situation under control, asking a local non-profit to arrange for food.

In March, the diamond and textile associations of Surat had decided to keep working despite the slowdown in business following lockdown in multiple nations. The Jewellery Export Promotion Council had said the diamond industry was expected to sustain losses of around 8,000 crore in February and March.

Apart from losses, the two industries, which employ around two million people, had cited the question of largescale unemployment.

After neighbouring Maharashtra, Gujarat currently has the second highest cases of coronavirus in the country.

Altogether, 3,548 coronavirus cases have been reported in Gujarat, of whom 394 patients have recovered and 162 have died. The Union home ministry has said the situation is especially serious in Ahmedabad and Surat. Maharashtra has reported 8,590 cases.