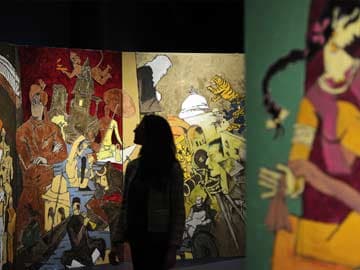 A member of staff poses next to a painting entitled 'Tale of Three Cities' by late Indian artist Maqbool Fida (M.F) Husain during a preview at the Victoria and Albert Museum for the 'M.F. Husain: Master of Modern Indian Painting' exhibition in central Lon

London: A set of eight rarely-seen paintings by celebrated artist M F Husain went on public display for the first time at the famous Victoria and Albert (V&A) Museum in London today.

The 'Indian Civilisation Series', also known as 'Vision of India through Mohenjo-Daro to Mahatma Gandhi', was commissioned by Usha Mittal, wife of steel tycoon Lakshmi Mittal, in 2008 as a tribute to the richness of India's history.

The ambitious set of triptych paintings went on to form part of Husain's final work before he passed away at a London hospital in June, 2011, aged 95.

"Spanning mythology, architecture and popular culture, the 'Indian Civilisation Series' is the final achievement of M F Husain, an artist whose work was continually inspired by the traditions of India," Mittal said.

"I was privileged to see this series as it was created and am delighted that it will be shown at the V&A, a lasting tribute to Husain Sahib and his vision," she added.

The paintings were made in London, where Husain spent his final years, and each panel explores a different theme, together creating a personal vision of India.

Interweaving religious and symbolic iconography with historic figures and events, the paintings also incorporate memories from the artist's own life.

"These paintings are especially poignant because they complete a nice circle in the artist's life. He was an artist in residence at the V&A in the 1990s and it is a privilege to bring his final work, also painted in London, back to the V&A," said curator Divia Patel.

"These paintings are not only by one of the most eminent artists of the Indian civilisation but are also incredibly accessible. They are perfect for anyone who wants to learn more about Indian contemporary art," she added.

Each work comes complete with a descriptive commentary which has been reproduced in the artist's own handwriting in an accompanying guide.

"Indian Civilisation is a tribute to the country Husain loved but had to leave after his life was threatened for portraying Hindu deities in the nude. He lived in London and Qatar in self-imposed exile from 2006. The artist's initial intention was to paint 96 panels exploring the breadth of Indian culture; unfortunately he died before he could achieve this ambition," reads a V&A statement.

'MF Husain: Master of Modern Indian Painting', on loan from Mittal, will be on display at the V&A until July 27.

Promoted
Listen to the latest songs, only on JioSaavn.com
The V&A is the world's largest museum of decorative arts and design, housing a permanent collection of over 4.5 million objects.