In MJ Akbar vs Journalists, Top Editors' Body Asks Him To Withdraw Case

MJ Akbar is the most high profile person to exit his job as India catches up with the #MeToo movement. 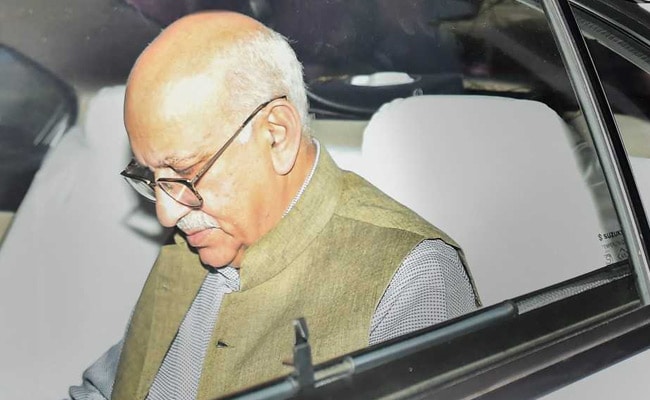 MJ Akbar was the president of the Editors Guild of India.

The Editors Guild of India has come out in support of the 20 women journalists who have named journalist-turned-politician MJ Akbar in the growing #MeToo movement, accusing him of sexual harassment. The top body of editors representing the media industry expressed its concern over Mr Akbar's defamation case against one of the journalists, Priya Ramani, and said he should withdraw the case.

"We hope that Mr Akbar will also display the grace to withdraw the criminal defamation case he has filed against one of these complainants. While Mr Akbar is entitled to all legal instruments available to a citizen to seek vindication, it would be paradoxical for a veteran editor to employ the instrument of criminal defamation," the Editors Guild said in a statement.

Incidentally, MJ Akbar was the president of the Editors Guild.

The Editors Guild assured its full support to the other women journalists in case he decides to sue them. "If any of them were to need legal advice or assistance, the Guild will do the best it can to help and also appeal to eminent lawyers to represent them pro bono," Editors Guild said.

Mr Akbar has sued journalist Priya Ramani, the first woman to name him in the #MeToo movement in India, accusing her of "intentionally putting forward malicious, fabricated and salacious" allegations to harm his reputation. A Delhi court agreed to hear the case and asked Mr Akbar to record his statement on October 31.

The former editor of newspapers like The Telegraph and the Asian Age was named by Ms Ramani in a tweet on October 8. She said MJ Akbar was the man she had written about in a magazine article a year ago, when the Harvey Weinstein scandal in the US set off an avalanche of #MeToo allegations.

Around 20 journalists had come out in her support on Tuesday evening, saying she was not alone and that they would testify in court against Mr Akbar.

MJ Akbar, 67, who became junior foreign minister two years ago, is the most high profile person to exit his job as India catches up with the #MeToo campaign.

Read the full statement by Editors Guild of India: 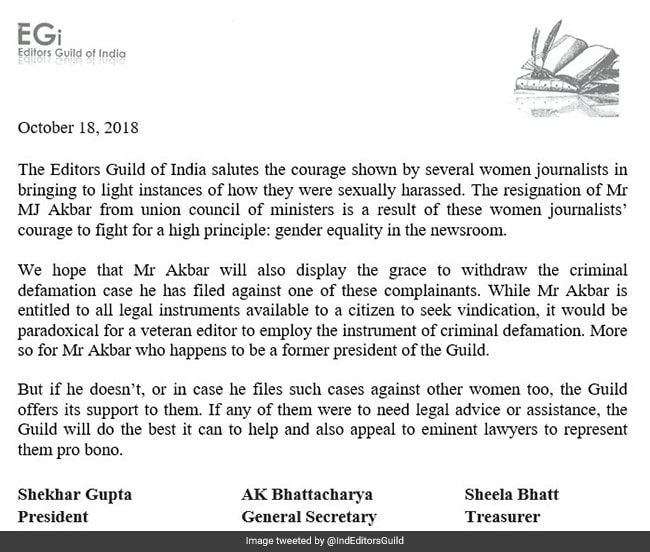