Meghalaya Miners' Rescue Operation: Navy Divers Reach The Bottom Of The Mine

A joint team of the National Disaster Response Force (NDRF), the Navy and the Odisha Fire Service is running the rescue operation. 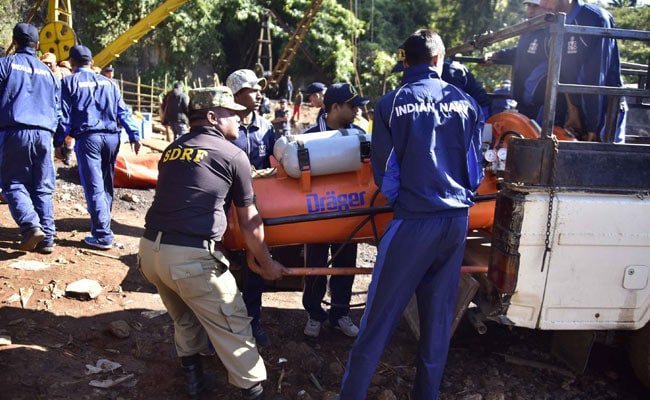 The Indian Air Force, Navy divers have been called in for the rescue operations.

As operation to rescue 15 trapped miners continue at the 370-foot-deep illegal coal mine in East Jaintia Hills district, one of the survivor's said on Saturday there is no way the trapped miners will come out alive.

Navy divers reached the bottom of the mine on Monday in search for survivors, officials said.

Sahib Ali from Assam's Chirang district is one of the five men who narrowly escaped the flooding coal mine a fortnight ago.

A joint team of the National Disaster Response Force (NDRF), the Navy and the Odisha Fire Service is running the rescue operation.

Coal India pumps have reached the accident site and pumping of water from one of the adjacent shaft would be tried out in the afternoon.

Here are the highlights of Meghalaya miners rescue operation:

Dec 31, 2018 19:38 (IST)
Rescuers say there has been no sign of life but insist it is still possible as miners may have found an air pocket. Santosh Kumar Singh from the federal National Disaster Relief Force told AFP that the emergency crew "is doing their best and they can only hope for good".
Dec 31, 2018 18:44 (IST)
Six divers from the Navy and the NDRF went down the shaft of the mine Sunday and spent around two hours to trace the miners but could not detect anything.
Dec 31, 2018 16:31 (IST)
The Indian Navy told that when the level of the water come's down the search will be feasible. The site has been cleared for Odisha Fire Sevice rescue team to start the pumping of water from the main shaft.
Other shafts nearby are being prepared to keep the Odisha fire service pumps enable to operate the pumping. 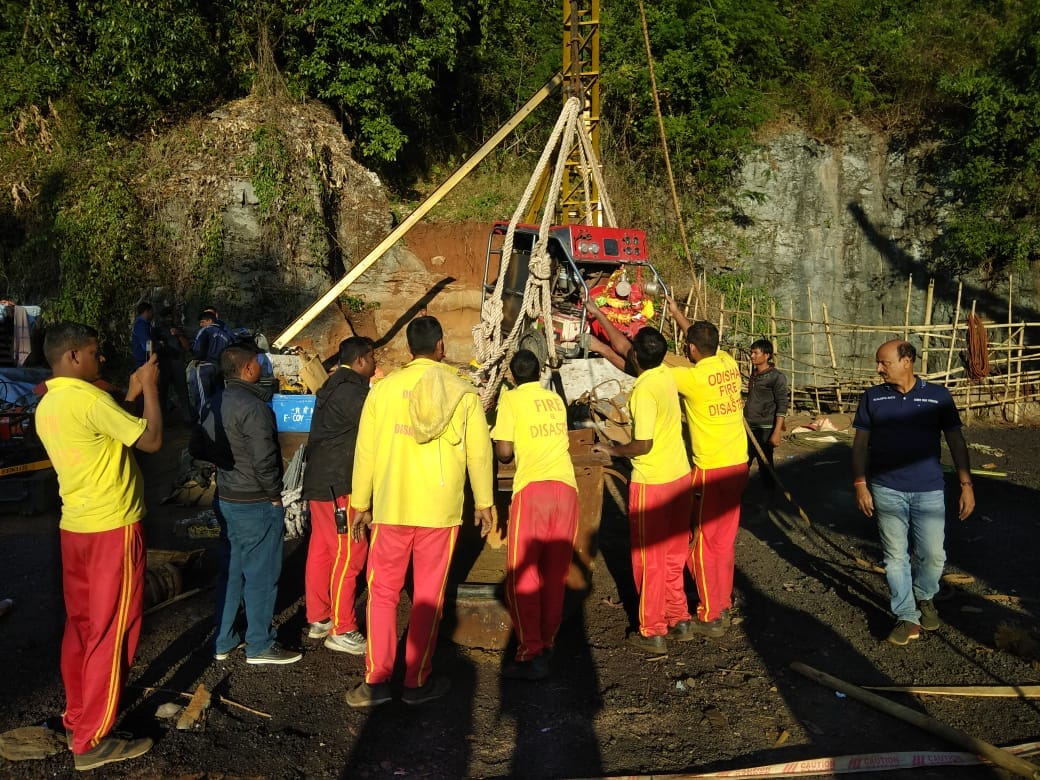 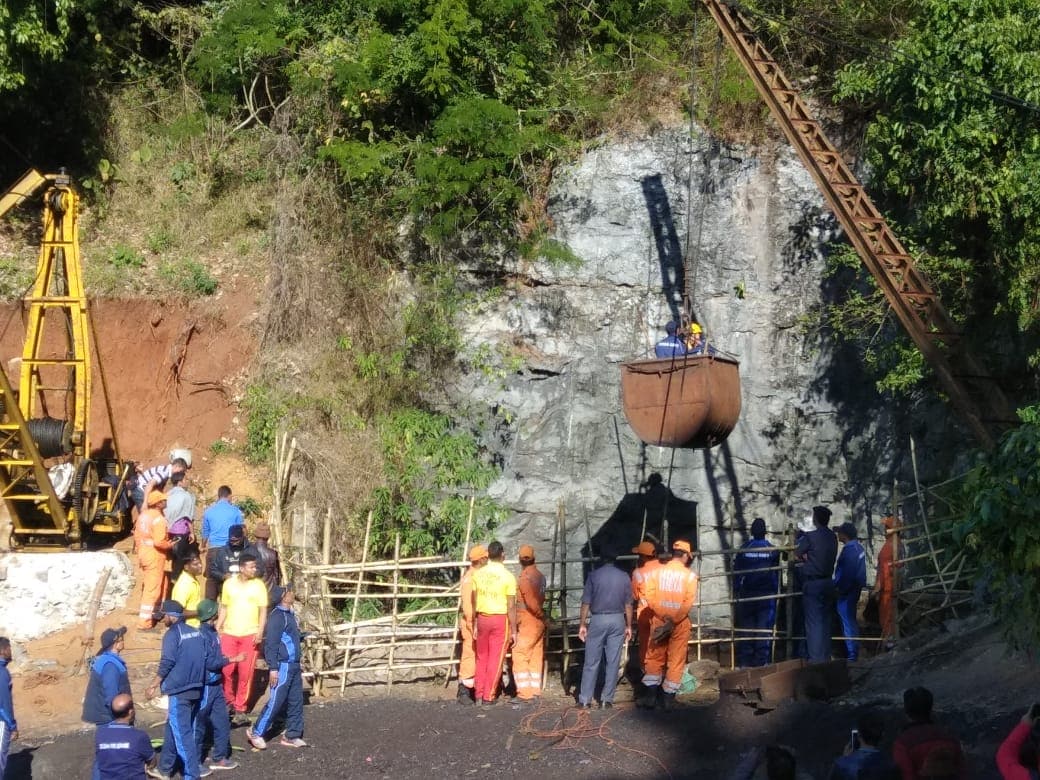 Dec 31, 2018 16:24 (IST)
Indian Navy divers reach the bottom of the mine: Sources
Despite poor visibility, one rat hole has been found with coal at its mouth. UWROV found that there are some wooden structure inside and coal lying beneath.
Dec 31, 2018 15:49 (IST)
"Divers of the Indian Navy have entered the main shaft of the coal mine to survey the bottom of the sheet using underwater remotely operated vehicle," spokesperson of the rescue operations, R. Susgni said.
"We are carrying out these safety measures to rule out decompression sickness of the divers," Mr Susgni said.
Dec 31, 2018 15:25 (IST)
One Coal India 100 horse power pump has reached the accident site, but it might take two days to get it operational due to logistics issue, say Coal India sources.
Dec 31, 2018 14:34 (IST)
The Indian Navy entered the main shaft to survey the bottom of the sheet using Under Water Remotely Vehicle (UWROV). The Indian Navy requested the District Administration to assist in de-watering so that it comes down to 30 meters or within safe diving limit then they would commence diving. These safety measures are being undertaken to rule out decompression sickness (DCS).
Dec 31, 2018 14:05 (IST)
Coal India Ltd too demanded for sophisticated material not available in Shillong.
Dec 31, 2018 13:08 (IST)
Rescue team at the accident site
With Navy, NDRF and OFS -- coordinating the rescue operations today, team goes into the mine with powerful equipment like gas-cutting machines and recovery vans 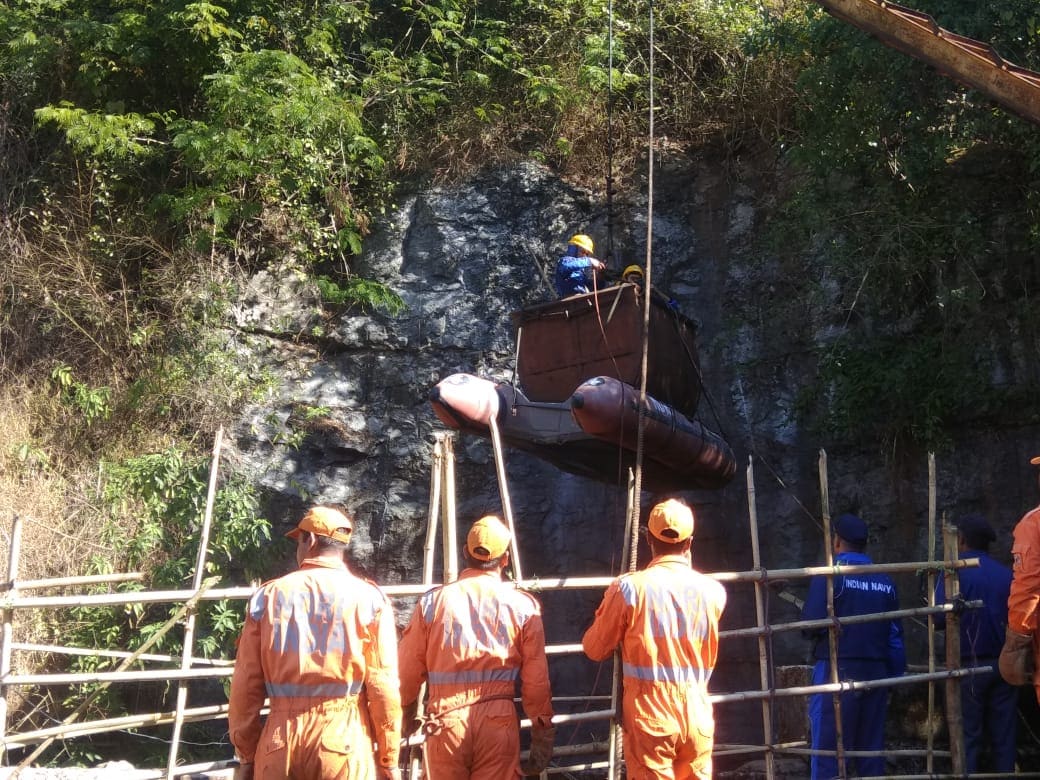 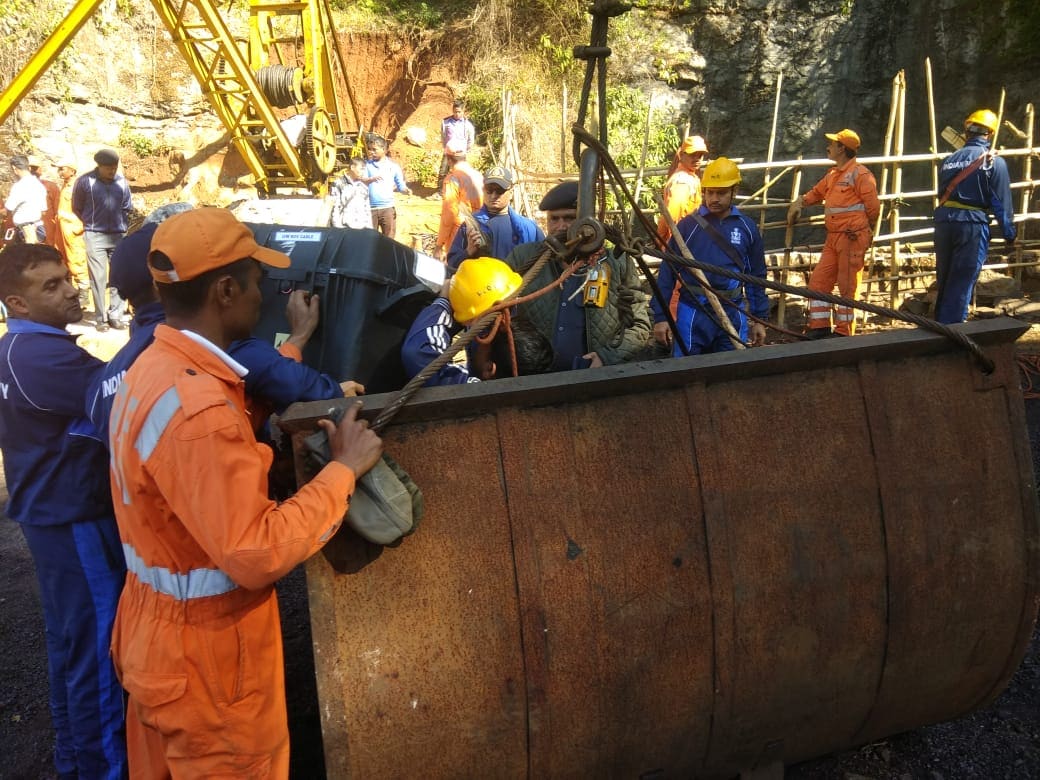 Dec 31, 2018 12:09 (IST)
The rescue team has requested to fix more halogen bulbs inside the shaft for better visibility.
All the three teams -- Navy, NDRF and OFS -- will coordinate the operation today. While water is being pumped out, the Navy personnel will use powerful equipment to dive their way deep into the mine.
Dec 31, 2018 11:32 (IST)
The Navy divers who went inside the mine at 3 pm and came out at 6 pm on Sunday reported that the shaft was too deep and dark, and the water level was at 150 feet, officials said. They could dive only till 90 feet.