In Arunachal Pradesh, A Dog Is Killed And Car Burnt As Message To BJP Leader

According to tribal folklore, it is said that killing a dog and throwing it at someone's residence is akin to a warning or death threat; in this case, BJP parliamentarian Tapir Gao is believed to be the target 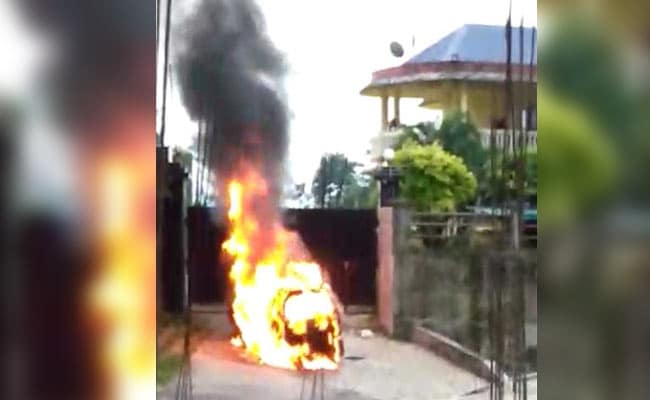 A dog was killed and a car set on fire today morning outside the private residence of a BJP parliamentarian in Itanagar in Arunachal Pradesh. Tapir Gao, who is also president of the party's state unit, was in New Delhi for the swearing-in ceremony of the NDA government when the incident occurred.

Family members have filed a complaint.

"A miscreant brought the vehicle to the gate of the house and set it on fire. He also killed a dog at the spot. Probably he is trying to terrorize my family," Mr Gao was quoted in a report by news agency IANS.

Police sources have confirmed that an investigation has started. SBK Singh, DGP Arunachal Pradesh, said the accused had been identified and teams had been sent to arrest him. Security around the BJP leader's house has intensified.

CCTV footage of the gruesome incident, which happened at 6 am, shows a group of individuals set a Maruti car on fire in front of the gates to Mr Gao's house, which is in the city's Niti Vihar neighbourhood. The video then shows them cutting a dog with a sword.

According to tribal folklore, it is said that killing a dog and throwing it at someone's residence is akin to a warning or death threat; in this case, Mr Gao is believed to be the target.

BJP sources said the heinous act could be the work of a few rogue supporters hitting back after the defeat of party candidates during recently held Assembly polls in the state. A total of 57 Assembly seats voted on April 11, with the BJP and its allies flipping the state from Congress hands. They won 41 seats, up from 11 in 2014.

According to the sources, some party workers may have been disgruntled by BJP leaders secretly backing preferred candidates by giving them JD(U) tickets. And despite not having an organisational base in the state before election, as many as seven former BJP candidates won their Assembly segments, beating BJP candidates in the process.

"This a political incident. My opponents are trying to terrorize me," Mr Gao added.

PM Modi Calls For Higher Polling, Discussion On 'One Nation, One Election'