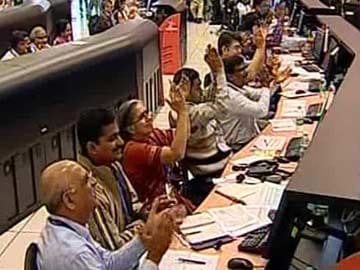 Among an audience made up largely of excited scientists at the spacecraft control room of the Indian Space Research Organisation or ISRO in Bangalore was Prime Minister Narendra Modi. He has been here since early morning to cheer the Mars Orbiter Mission or MOM and clapped his way to the rostrum, where he said with a big smile, "The moment this mission was named MOM, I knew it would not  disappoint. Moms never fail...We dared to reach out to the unknown." (We Have Gone Beyond Boundaries of Human Imagination: PM at ISRO)

"History has been created today. We have achieved the near impossible. I congratulate all ISRO scientists and all my fellow Indians on this historic achievement," Mr Modi said, noting that India was the first country to achieve this on the first attempt. (Pics: India's Mangalyaan Successfully Enters Mars Orbit)

"The odds, were stacked against us. Of the 51 missions attempted across the world so far, a mere 21 had succeeded. But we have prevailed," he said, emphasising that this was a completely 'Made in India' effort. (Mangalyaan: 'Odds Against Us, But We Prevailed,' Says PM: 10 Facts)

"We built it indigenously, in a pan-Indian effort, stretching from Bangalore to Bhubhaneshwar, and Faridabad to Rajkot," the PM said, repeatedly congratulating India's scientists for their achievement.

By placing Mangalyaan in the Mars orbit, India joins the US, the European Space Agency and the former Soviet Union in the elite club of Martian explorers. China and Japan have failed.

Fast tracked by ISRO, Mangalyaan was made in just 15 months at a cost of Rs. 450 crore - the cheapest inter-planetary mission ever to be undertaken. Mr Modi again noted today that it was cheaper than a Hollywood movie.

The rocket that carried India's first unmanned satellite to Mars was as high as a 15-storey building and weighed nearly 320 tonnes - almost as much as 50 full-grown elephants.

Promoted
Listen to the latest songs, only on JioSaavn.com
The Mars Orbiter first made several revolutions around the Earth as it gathered enough velocity, and then it was shot onwards to Mars on its long journey. One after the other, four stages of the rocket had ignited, taking Mangalyaan higher into space.

In the Mars orbit, Mangalyaan will look for signs of life on the Red Planet, asking that big question: Are we alone in this universe?