Pramod Sawant took oath along with ministers in his 12-member cabinet that included his two deputies. 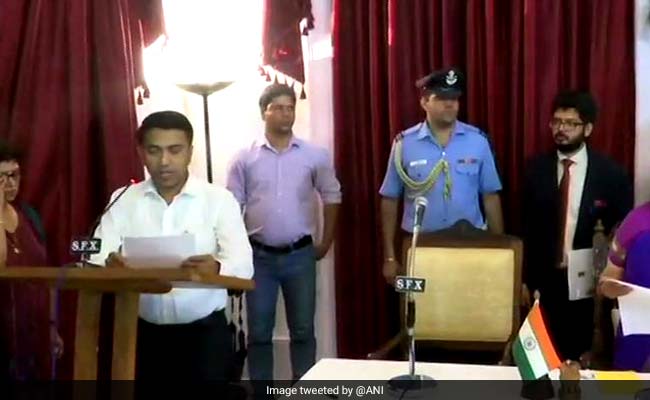 Pramod Sawant took oath along with ministers in his 12-member cabinet.

Sulakshana Sawant, wife of Goa Chief Minister Pramod Sawant who took an oath of office early today, has said that Manohar Parrikar was like a father for them. She said it was due to the guidance of the former CM that her husband got the chance to become the Chief Minister of the state.

"It is a day of mixed emotions for us. We have lost one of our greatest leaders, Manohar Parrikar who was like a father figure to us. Only because of his (Parrikar) blessings and guidance this could have happened," Sulakshana Sawant, who also heads the BJP's women's wing in Goa, was quoted by news agency IANS.

"More than the joy, the sense of great responsibility we feel right now is greater," she added.

The BJP's Pramod Sawant, 45, was sworn in as Goa Chief Minister at 2 am on Monday night as the nation mourned his predecessor Manohar Parrikar.

The swift chain of events that ended with a hasty, post-midnight ceremony, started soon after Manohar Parrikar died on Sunday evening. The tough negotiations with BJP allies, which continued overnight, were resolved after party chief Amit Shah stepped in and two lawmakers of the Maharashtrawadi Gomantak Party (MGP) joined the BJP.

Mr Sawant will have two deputies - unprecedented for the tiny seaside state. Sudin Dhavalikar of the Maharashtrawadi Gomantak Party and Vijay Sardesai of the Goa Forward Party are the new deputy Chief Ministers.

Pramod Sawant took oath along with ministers in his 12-member cabinet that included his two deputies.