The six murders in Haryana's Palwal happened in different areas and are believed to be committed by the same man.

A man, who was caught on CCTV camera, allegedly murdered six people with a rod in Palwal.

Palwal, Haryana: A former army officer has been arrested for allegedly bludgeoning to death six people in Haryana's Palwal within a span of an hour. All the six murders took place between 2:30 am and 3:30 am. Though the man is in custody, Palwal, a town 80 km from Delhi, was put on high alert and residents were asked not to venture out of doors.

The police said they suspect the man Naresh Dhankad, 45, is mentally unstable. A lieutenant in the army, he had taken voluntary retirement in 2003 on medical grounds, the police said.

Last night, around 2.30 am, he was caught on CCTV while entering the local government hospital. Dressed in a blue sweater and white trousers, he is seen moving through what looks like a hospital corridor. In the video released by the police, he is seen holding an iron rod and looking around. 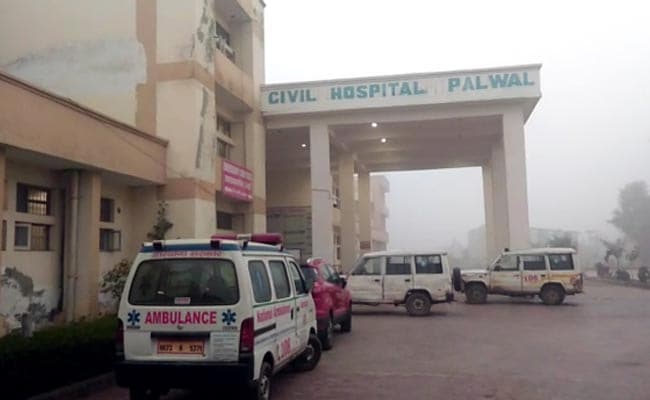 The accused was first taken to the Palwal Civil Hospital and later to a hospital in Delhi.

The first murder took place within minutes. The victim was a 35-year-old woman, who had come to attend to a relative. She was found stretched out outside the Intensive Care Unit on the first floor of the hospital.

The next three murders took place in rapid succession -- the men were security guards and beggars who were found outside the hospital. The last victim was a security guard.

"Police found all the dead bodies within a radius of about one kilometre. It looks like he committed the murders in an hour," a police officer told reporters. At least one of the murders took place near a police station.

The police, who identified him from the CCTV footage, finally caught up with him in Adarsh Nagar -- an area close to the hospital -- and managed to overpower him after a struggle. Dhankhad apparently has suffered brain haemorrhage, news agency PTI reported. He was first taken to the Civil Hospital in the district and later referred to a hospital in Faridabad. He has now been shifted to Delhi's Safdarjung Hospital as his condition worsened where doctors said he will be operated upon.

A police spokesperson said Dhankhad got married 10 years ago and separated from his wife four years later. Dhankad was the youngest of five brothers.

His brother, Chandrapal, claimed that Dhankhad was mentally ill and was being treated by a doctor in Muradnagar, the spokesperson said.

He claimed that his brother had completed M.Sc from Haryana Agriculture University in Hisar where he was a topper.