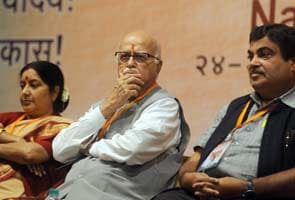 New Delhi: Top leaders of the BJP met this morning at LK Advani's residence to plan their course of action for the Winter Session of Parliament.

They discussed Mamata Banerjee's offer to move a no-confidence motion against the Manmohan Singh government. BJP spokesperson Ravi Shankar Prasad said that while the party has formed an opinion on the matter, they will discuss it with other parties in the NDA before revealing their final stance. The meeting of the coalition is currently on in the national capital.

Sources say the BJP is unlikely to support the Trinamool-sponsored no-trust vote.The BJP's  leaders are said to be more in favour of cornering the government with a debate and vote on the contentious issue of Foreign Direct Investment in multi-brand retail rather than force a test of strength, which they fear, will be won comfortably by the government. A defeated no-trust motion will be an endorsement of the government's policies and will considerably blunt the opposition's attack for the rest of the session. Also, it will secure the government for the next six months - rules do not allow the opposition to move another no-confidence motion for half a year.

The main opposition party reckons that some of the government's key allies, who are expected to rally around it in the face of a no-trust vote, will find it difficult to openly support it on FDI in retail. M Karunanidhi of the DMK, which is a constituent of the Manmohan Singh government, reiterated yesterday, "We are not in favour of the decision to allow FDI (in multi-brand retail)." Mulayam Singh Yadav, who provides crucial external support to the government, too has been a vocal opponent of FDI in retail. The BSP's Mayawati has been non-committal.

The BJP is focused on consolidating the floor efforts of the NDA that it leads and other opposition parties. The Left too has said it favours forcing a vote under Rule 184 on the issue of  FDI in multi-brand retail. "While this wouldn't bring the government down, it would make it morally wrong for them to push through their FDI policy,'' Prakash Karat of the CPI(M) told NDTV yesterday. Mr Karat also said the CPI(M) was speaking to 'like-minded' parties like the Samajwadi Party to get support on its resolution against FDI in retail.

The BJP's important ally in the NDA, the Janata Dal (United), has said that it is important to debate the policy; it wants Parliament to function and will not even press for a vote. At today's meeting of the NDA, the BJP has on agenda getting ready its ammunition to attack the government on multiple fronts during the session, which begins on Thursday. It will decide on its strategy on targeting the Prime Minister and also taking on the ruling Congress on the allegations of corruption that Robert Vadra, son-in-law of Sonia Gandhi, faces. It will also question the government on the hike in diesel prices, inflation and on violence in Assam.

The BJP's decision will be tracked closely. By the government, which is readying its defence, and also by Mamata Banerjee, for whom numbers are failing to add up. She has 19 Lok Sabha MPs and needs at least 50 to even move the motion. J Jayalalithaa's AIADMK, which met today to decide on its strategy in Parliament, has made it clear that the party's stand on Ms Banerjee's proposed no-confidence motion against the UPA government would be decided based on numbers. (Read: Jayalalithaa keeps Mamata Banerjee waiting) The AIADMK has nine MPs in the Lok Sabha. For some months now the BJP has been aggressively wooing the party, which rules Tamil Nadu right now, and Ms Jayalalithaa has been warm to those overtures.

The Trinamool Congress is braving it out. Party MP Derek O Brien said the Trinamool would get the support of 50 MP's that it needs. "Thursday morning before 10 'o'clock we will be tabling that no-confidence motion and we will take it from there," he said.

The government is making all efforts to ensure the Trinamool doesn't get there. Parliamentary Affairs Minister Kamal Nath told NDTV last evening that the UPA was in touch with all key players to strengthen its defences, including ally DMK and the Samajwadi Party and Bahujan Samaj Party, both of who are supporting the government from outside. Mr Nath has also indicated that the government might be unwilling to even accept the debate-and-vote motion, although a final decision on it will only be taken after a clear picture of support for Ms Banerjee emerges.

CAN THE GOVT SURVIVE AN FDI VOTE?