A Jaspal Bhatti Gem Is Viral Amid Maharashtra Crisis. Twitter's Lovin' It

The clip features Jaspal Bhatti playing the character of an agent, whose area of expertise is the buying and selling of MLAs to politicians. 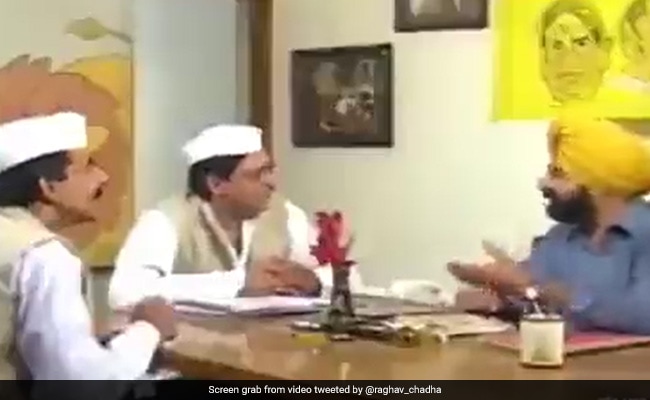 Amidst the ongoing Maharashtra crisis, a clip from the hit DD show Full Tension featuring the late satirist Jaspal Bhatti is going viral on the Internet.

The clip features Jaspal Bhatti playing the character of an agent, whose area of expertise is the buying and selling of MLAs to politicians who wish to form the government but do not have enough candidates in hand.

The clip begins with Jaspal Bhatti talking to politicians about the number of MLAs they need. He then asks his assistant to look into the matter of another client who needs 40 MLAs. The clip then shows Mr Bhatti's character and the politicians discussing the “cost” per MLA. On being told that each MLA would cost them around Rs 50 lakh, the politicians are taken aback but still ready to shell out the hefty sum to form the government. In the background, the company banner reads, "Sale purchase of MLAs".

However, as the politicians mull paying Mr Bhatti the sum to "purchase" the MLAs, they are informed that 40 of their members have been deflected to another party. It is then shown that it is Mr Bhatti himself who paid the 40 MLAs to deflect to another party.

The video comes at a time when over 40 MLAs from Shiv Sena' have joined a senior leader staging a revolt against Uddhav Thackeray.

Sharing the clip, a user said, “Jaspal Bhatti show 15 years ago. Has anything changed today?”

Jaspal Bhatti show 15 yrs ago. Has anything changed today??? pic.twitter.com/nq2gzRLcE2

Jaspal bhatti was a Visionary. pic.twitter.com/B2aK4qXK8K

Good day to remember this video again. The great Jaspal Bhatti at his best pic.twitter.com/JCM93YcIHG

One of the most hilarious gems from Jaspal Bhatti's vast treasure trove. As pithy and sharp today as it was three decades ago. https://t.co/mqfEETVda2

Rebel leader Eknath Shinde has claimed the backing of 40 MLAs but this has been challenged by party leader Sanjay Raut, who said at least half of them were "in touch" to come back.

This morning, three Sena MLAs took a flight to Assam where the rebels are camping. At least 40 MLAs are present with Eknath Shinde at Radisson Blu Hotel in Guwahati. This includes five Independent MLAs, according to sources.

Though Eknath Shinde's rebellion is the first under Uddhav Thackeray, the party has seen revolts by prominent figures on four occasions, three of them under the watch of its charismatic founder Bal Thackeray.