"What has happened now is what the voters wanted in the beginning," the spokesperson of the rebel faction Deepak Kesarkar said. 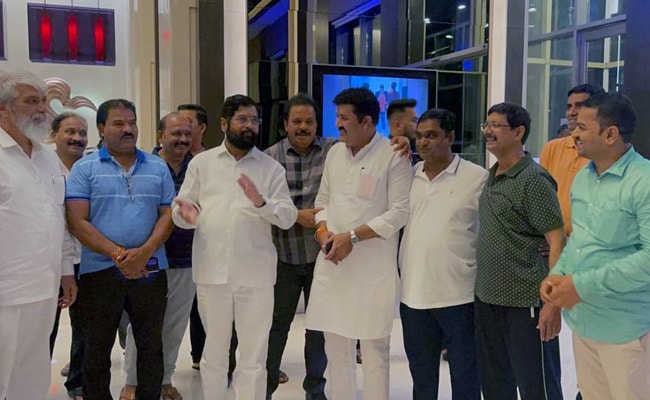 We still have love and respect for Uddhav Thakreray, Deepak Kesarkar said.

Just as rebel Shiv Sena faction leader Eknath Shinde left for Mumbai to meet the Maharashtra Governor and support the BJP in forming a new government, the spokesperson of the rebel faction Deepak Kesarkar held a press conference in Goa repeatedly stressing that it was ideology, and not expectations of plum postings with cabinet portfolios, that led them to break off from the Thackerays and go with the BJP. He also pointed out that they are the majority and their whip will be binding on the 16 MLAs of the Uddhav Thackeray camp. "The majority has decided on a whip regarding Shiv Sena, two-thirds have voted to appoint a whip for the party," he said.

Mr Kesarkar also claimed that they did not betray Uddhav Thackeray and still have love and respect for him. "Nobody in Shiv Sena is against the Thackeray family," he added.

"All speculations of portfolios are baseless. No decision has been taken on that yet," he said, though conceding that their negotiations with the BJP to form a government have already started.

Maharashtra's people had voted for the Shiv Sena and the BJP to stay together but a new coalition was created with the Nationalist Congress Party and Congress instead, Mr Kesarkar said, adding that the party compromised with ideology and ignored appeals from many Sena leaders who warned against attempts by Congress to weaken Shiv Sena.

"What has happened now is what the voters wanted in the beginning," he said.

Mr Kesarkar said that BJP is Sena's original ally and they fought elections together but there were repeated attempts to create rifts.

He then launched a scathing attack on Thackeray loyalist and Sena's most vocal leader Sanjay Raut, slamming him for accusing the rebels of backstabbing Uddhav Thackeray. "Who is backstabbing whom? Shiv Sena fought elections with the BJP but formed a government with the NCP and Congress. There were attempts to create an atmosphere to mobilize the Sena cadre against us...The less Sanjay Raut spoke, the better it would have been," he fumed.

"We didn't backstab the party. It is people like Sanjay Raut who have done it," he added.

The rebel camp spokesperson also accused the NCP of not voting for the Sena candidate in the recent Rajya Sabha elections where the Sena candidate lost. "Even Sanjay Raut admitted this at that time," he said. "Uddhav Thackeray said I'll send a Shiv Sainik to the Rajya Sabha, but our allies then betrayed us. Action by Uddhav Thackeray should have been taken right there and then," he added.

He further claimed that 14-15 Sena MLAs close to Mr Thackeray wanted to remove Mr Shinde from the party.

BJP's Devendra Fadnavis is likely to be the next Chief Minister of Maharashtra while Eknath Shinde will be Deputy Chief Minister.

The two are likely to say they have the support of more than 150 MLAs.