Opposition stalled the state assembly for over an hour on the issue, and proceedings resumed only after the House Chairman ordered the farmer's release. 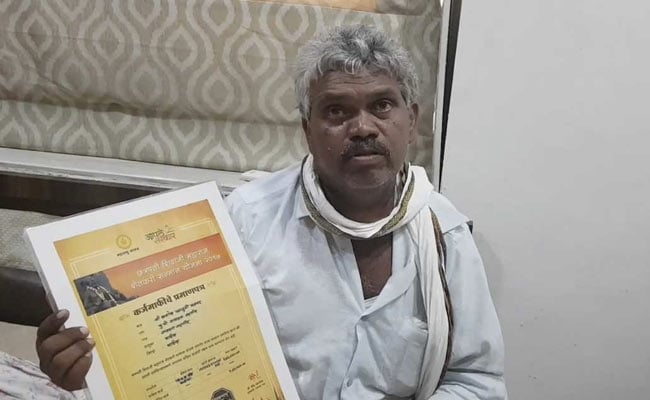 Ashok Manwar said he was not getting the full extent of the loan waiver he was entitled to.

A farmer who had come to meet Dhananjay Munde, Leader of the Opposition in the Maharashtra Legislative Council, was detained by Mumbai police today for criticising the Devendra Fadnavis government's loan waiver scheme before the media.

The opposition raised the issue in the state assembly, stalling it for over an hour. Legislative proceedings resumed only after the Chairman ordered the police to release the farmer.

Ashok Manwar, a 52-year-old farmer from Washim, said he had come to Mumbai to expose how the state government's loan-waiver scheme was "letting down" those from the agricultural community.

The farmer alleged that he had received a loan waiver of Rs 1.4 lakh, for which a certificate was issued. But when he went to the bank, the officials there reportedly told him that the waiver was only for Rs 77,000. Ashok Manwar approached the District Collector and other officials, but the problem wasn't resolved. That was when he decided to come to Mumbai and meet Dhananjay Munde.

After meeting the Nationalist Congress Party leader, he interacted with mediapersons on the state assembly premises. That was when the police appeared, shoving him into a van and whisking him away to the Marine Drive police station. After his release, the farmer rushed to Dhananjay Munde's house for fear that he may be arrested again.

The reason for his detention remained unclear. "They kept asking me why I was speaking to the media, and whether the media was responsible for waiving my loan. They detained me for three hours," Ashok Manwar told NDTV.

"I am scared to go out now. What if the police pick me up again? What if they book me on some pretext? They said they could smell something on me. Have I come here to die? They offered me food after three hours, but I refused to have it. I am scared because they may do anything if I go out now," the farmer said.

Dhananjay Munde told news agency PTI that police personnel at the Marine Lines station did not take his calls for a long time after the farmer was detained. "The farmer, to whom the chief minister had given the certificate two years ago on Diwali, is yet to receive his due benefits. I showed the certificate in the House, and the police took action against the same farmer," he said. "I tried calling the police station, but the inspector in-charge would not answer my calls. Even his phone was switched off."

The incident occurred on a day when the government informed the legislative assembly that 12,021 farmers had committed suicide in Maharashtra between 2015 and 2018. As many as 6,888 of those farmers were found eligible for government aid after due scrutiny by district-level committees, Relief and Rehabilitation Minister Subhash Deshmukh told the House in a written reply.