In the video, Pradeep Sharma is purportedly seen admitting that Shiv Sena leader Eknath Shinde, who is currently a Cabinet minister in the BJP-led state government, helped him spend a part of his sentence in hospital. 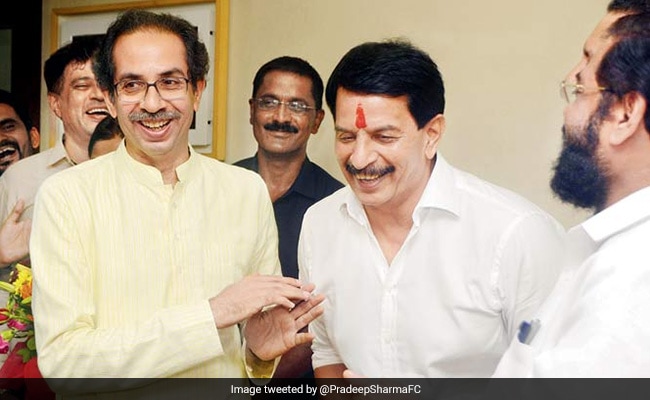 The 1983-batch state police service officer, who opted for voluntary retirement earlier this year, made this admission while addressing a rally in Nallasopara area of neighbouring Palghar district earlier this week.

A purported video of his speech is making the rounds on social media.

In the video, Mr Sharma is purportedly seen admitting that Shiv Sena leader Eknath Shinde, who is currently a Cabinet minister in the BJP-led state government, helped him during his difficult time.

"During the tough period of my life, Shinde saheb helped me a lot...during the jail term of three-and-a-half years, I spent two-and-a-half years in hospital, it was only because of his help," he said.

However, when contacted for his comments on the remarks, Mr Sharma's spokesperson said the video being circulated on social media was "out of context".

Reacting to the matter, Mr Shinde said Mr Sharma was a police officer (at the time of the case) and on duty.

"It is not an offence to help the police," the minister told reporters. Mr Sharma is contesting the October 21 state polls from Nallasopara.

The former police officer, who has more than 100 encounters to his name, was arrested in an alleged fake encounter of Ramnarayan Gupta alias Lakhan Bhaiya, a member of Chhota Rajan's gang, in 2006.

He was sentenced to three-and-a-half years imprisonment and later sacked by the state government from service in 2008.

A sessions court in 2013 acquitted him in the case, and he was reinstated in the police force in 2017.

Pradeep Sharma, who was heading the anti-extortion cell of Thane police in his last posting, opted for voluntary retirement earlier this year.