Swami Prasad Maurya, once a close confidante of Mayawati, slammed the BSP chief for crying foul after the alliance's poor performance in the elections in the state. 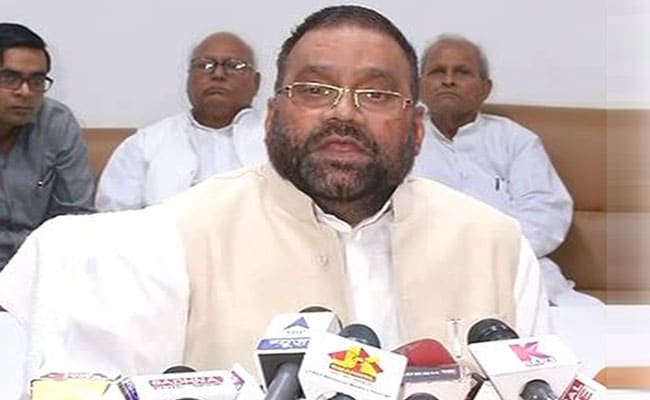 The Bahujan Samaj Party (BSP) emerged as a beneficiary while Samajwadi Party was pushed into "coma" by the coming together of the two parties in the Lok Sabha polls in Uttar Pradesh, state minister Swami Prasad Maurya said in Lucknow today.

"This is a fact that Mayawati has benefited from the alliance but Akhilesh Yadav faced a major loss by stitching the alliance with Bahujan Samaj Party. So the coalition was a profit deal for the BSP but it led SP into a state of coma," he said.

Maurya, once a close confidante of Mayawati, slammed the BSP chief for crying foul after the alliance's poor performance in the elections in the state.

"Despite having benefited from the alliance, Mayawati is levelling allegations on Samajwadi Party. Whatever Mayawati is doing is not new. She is known for this nature."

Maurya, who crossed over to the BJP before the 2017 Assembly polls, said that the alliance has no relevance and is expected to come crumbling in the coming days.

Later in the day, Mayawati told news agency ANI that her party will contest the upcoming Assembly by-elections for 11 seats on alone. She, however, said that it was not a "permanent break" from the alliance.

"It is not a permanent break. If we feel in future that SP Chief succeeds in his political work, we'll again work together. But if he doesn't succeed, it'll be good for us to work separately. So we've decided to fight the by-elections alone," she said.

On Monday, Mayawati reportedly told her party workers to gear up for to fight the Assembly bypolls alone.

After Mayawati's announcement, SP chief Akhilesh Yadav too decided to go solo in the Assembly by-elections in the state.

"I will think about what is being said about the alliance and if it has broken, the SP will also go it alone in the by-polls after consultation amongst the party members," Yadav told reporters.

SP and BSP had dumped their decade-old animosity to stitch a pre-poll alliance for the Lok Sabha elections in which they put a very poor showing.

While BSP won 10 out of the 38 seats contested, SP bagged just five out of the 37 it contested in the elections.