At Madhya Pradesh government schools, students are being made to sweep the floor, make rotis and even clean the utensils after having mid-day meals

In Madhya Pradesh, students at a government school in Singrauli were seen cleaning plates

From sweeping the floor, to making rotis and even cleaning utensils, shocking details have come to light about the plight of children at government schools in Madhya Pradesh. With low-quality teaching and lack of infrastructure leading to serious learning gaps, the drop-out rate at secondary schools in the state was as high as 23.8 per cent in 2020-2021.

Students at the government school in Koyalari were seen making rotis. Some others were made to sweep the hostel rooms.

Schoolgirls from classes 5 and 6 at Chakdevpur village secondary school were seen cleaning toilets and sweeping the floors, after fetching water from a hand pump at their school premises. 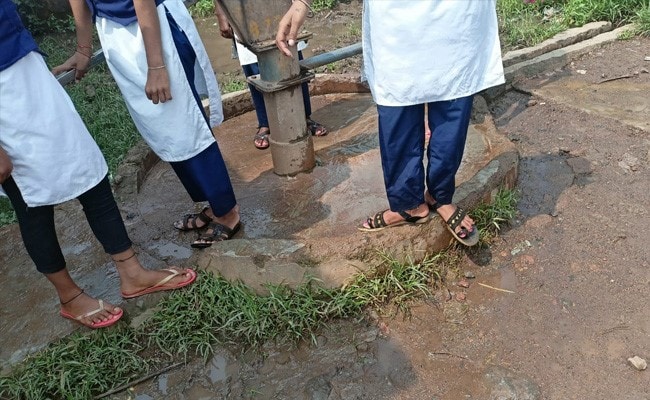 Promises of "referring" the matter to the "higher authorities" and "probing the issue" were all that officials could offer to address the difficulties faced by the students.

"We shall refer this issue to the higher authorities and have it investigated," said PN Chaturvedi, Additional Commissioner, Tribal Welfare, reacting to the sorry state of affairs at the government school in Koyalari.

When asked to comment on the difficulties faced by the students at Chakdevpur secondary school, Chandrasekhar Sisodia, the District Education Officer, said: "We have taken the matter very seriously and are probing the issue. Action will be taken against those found guilty."

In a gross violation of the Right to Education Act, students at a government primary school in Singrauli were even seen cleaning their plates after having their mid-day meals.

According to official data, there are 21,077 government schools in Madhya Pradesh with just one teacher each, even as 87,630 teacher posts are lying vacant.

Meanwhile, in Khargone district, a dilapidated school building has forced classes to be conducted in the open, under a tree. Since 2018, the school administration had sent repeated requests and reminders to the state Education Department to have the building repaired, but help is yet to arrive.

The state government's own survey report shows that out of 98,963 primary and middle schools, 36,498 have no electricity. There is no hand-washing facility in 34,553 schools.

While the Madhya Pradesh government continues to make tall claims about "world-class" education in the state, statistics reveal that 10,630 girls have dropped out of schools owing to poor safety and lack of toilets.