Loss of Wetlands Aggravated Floods in Jammu and Kashmir: Report 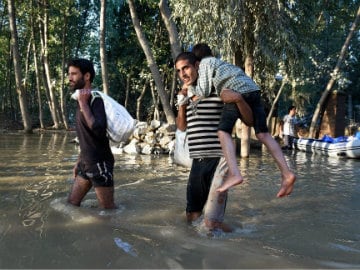 Victims of flood return their home at Rakhshalana village of district Budgam. (Press Trust of India)

Kolkata: Terming the Jammu and Kashmir floods as an ecological disaster, the Bombay Natural History Society (BNHS) today said that loss of wetlands, which act as a buffer for floods, aggravated the situation.

"This can be termed as an ecological disaster. The disastrous damage caused to life and property could have been minimised if the large number of wetlands that once existed in the valley, had been preserved," eminent naturalist and BNHS director Dr Asad Rahmani said in a statement.

He said that wetlands act as a sponge that retains excess water and the Wular Lake is a classical example of that. Even the British and former Maharajas of Kashmir used to consider Wular as a buffer for the floods where excess water can be absorbed.

Studies in the valley over the years reveal that there has been a severe loss of wetland for various commercial activities.

A BNHS report said the famed Dal Lake in Srinagar has seen numerous reclamations all along its periphery in the marshy areas which has drastically reduced the lake area to just about 1,200 hectares, almost half of its earlier spread. Wular Lake which was once spread across 20,200 hectares, now remains restricted to a mere 2,400 hectares.

In the last 30 years, nearly 50 per cent of the wetlands in the Kashmir valley have been encroached upon or severely damaged, BNHS officials said.

Promoted
Listen to the latest songs, only on JioSaavn.com
Considering the importance of wetlands, not just in Jammu and Kashmir, but across India, BNHS has recommended the passing of a Wetland (Conservation) Act on the lines of the Forest (Conservation) Act.

Protection of wetlands will not only help in flood control but also help in recharging the ground water levels across the country and thus ensure better food security by way of increased water availability, Dr Rahmani said.