In 2014 parliamentary elections, it was the coastal belt votes that helped Mr Tharoor scrape through with a margin of around 15,000 votes even as BJP's then Lok Sabha candidate

Shashi Tharoor spoke to NDTV after he interacted with voters in Nemom.

In 2014 parliamentary elections, it was the coastal belt votes that helped Mr Tharoor scrape through with a margin of around 15,000 votes even as BJP's then Lok Sabha candidate - O Rajagopal - came a close second. Two years later, however, O Rajagopal became BJP's first member of legislative assembly in Kerala when he was elected from Thiruvananthapuram's Nemom.

Earlier today, Mr Tharoor, who is contesting from Thiruvananthapuram again, was seen seeking support from voters in Nemom. He posed for selfies with devotees exiting the mosque in the heart of the city and also interacted with young college students as a part of election campaign.

Challenging Shashi Tharoor in the national elections this time is BJP candidate Kummanam Rajasekharan, ex-Governor of Mizoram. He began as an activist in the Rashtriya Swayamsevak Sangh, BJP's parent organisation, and rose up the ranks to the Kerala BJP president in 2015. He held the post till 2018.

Speaking to NDTV, Mr Tharoor said: "Youngsters have seen the reality of broken promises of Modi government. People have seen that there are no jobs. The country has seen highest number of farmer suicides this year." 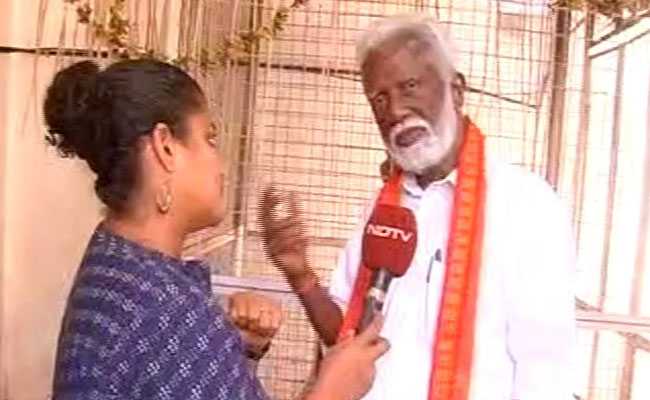 "For the first time ever, Kerala witnessed farmer suicides. The personal favour gained by O Rajagopal will not be counted any more since he isn't contesting. Mr Kummanam is left for the hardcore RSS hindutva vote. I am inclined to think that my margin of win will be more than the last time," he said.

A three-cornered contest in Thiruvananthapuram - between the Congress-led front, CPM-lef front and the BJP - may prove to be a close shave for the three contenders.

On the first day of his campaign after his name was officially declared by the party as the Lok Sabha candidate on Thursday, Mr Rajasekharan  today visited the memorials of social reformers - who engaged actively with Hinduism.

While speaking to NDTV, questioning the CPI-M and Congress, the BJP candidate kept referring to "protection of faith and tradition".

"There are several issues. People have seen how Congress and CPI-M have failed alternatively. They have seen how we brought Union Minister Nirmala Sitharaman to Trivandrum when it was hit by Cyclone Ockhi. But it's also important that we need to protect the faith and tradition of people. People need to be united," he said.

On being asked who were these people he was referring to, Mr Kummanam Rajasekharan answered: "All the people... because people are worried about their faith. If Sabarimala can happen to Hindus, tomorrow this can happen to Christians and Muslims."

According to sources in the BJP, while the party will continue to focus on Hindu vote consolidation, making inroads into areas with minorities will also be the focus.

Both Shashi Tharoor and Kummanam Rajasekharan had opposed the Supreme court's verdict on Sabarimala last year that allowed women of menstruating age to enter the shrine.

While Shashi Tharoor backed his party taking the legal recourse, Mr Kummanam Rajasekharan's party took to state-wide protests, and some of these protests turned violent.

Countering this narrative is Left candidate C Divakaran- a three-time Left legislator - who managed to win from the assembly seats like Nedumangad, where he was least expected to win.

"Left government is the role model in India in terms of protecting the constitution. Wether it's a church, temple or mosque - all belong to a secular republic. There is no question of discrimination, especially gender discrimination," C Divakaran told NDTV, as he interacted with colleges students.

According to 2011 census, Thiruvanathapuram has around 67 per cent of Hindus and around 35 per cent minority votes. Khalil -Ur-Rehman, in 30s, a teacher, says: "My vote is against fake nationalism. In India, there is an attempt to instill fear in anyone who questions any statement or development. This kind of fear must not reach Kerala," he said.

L Baby, a fisher woman in her 50s in the coastal Thiruvananthapuram, says, "Traditionally, my family voted for Congress. This time we have not decided who to vote for - Congress or Communists. We will see the candidates, evaluate who will benefit us the most and we will vote accordingly."