Amit Shah alleged that on the day of the Balakot air strike, the entire country celebrated and gloom prevailed at the offices of Mr Kejriwal and Mr Gandhi. 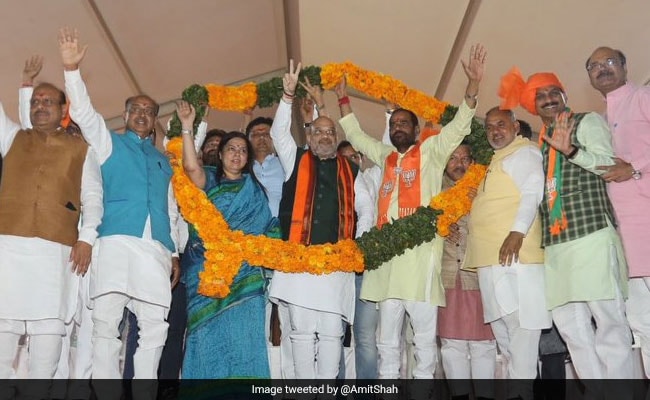 Amit Shah addressed his first election rally in Delhi ahead of the May 12 national polls in the city.

Mr Shah was addressing his first election rally in Delhi ahead of the Lok Sabha polls in the city scheduled on May 12.

"Students shouted anti-national slogans in JNU and Kejriwal stood in support of them. Will public ever forgive this? Rahul Gandhi went two steps further. BJP said we want to do away with Article 370 and Article 35A and make Jammu and Kashmir an integral part of India. He says abolish sedition law. What will we do if someone is found spying for Pakistan? Rahul and Kejriwal should answer," he said addressing the gathering in South Delhi's Vasant Kunj.

The BJP chief said he has never seen anyone like Arvind Kejriwal who changes his stand so quickly as per convenience.

"First he ditched Anna Hazare. What happened to his promise to send former Delhi chief minister Sheila Dikshit to jail on corruption charges. He used to say Dikshit was corrupt. But he first formed a government with her support. Now she has said no to an alliance with AAP but he went running for alliance," he added.

Mr Shah alleged that on the day of the Balakot air strike, the entire country celebrated and gloom prevailed at the offices of Mr Kejriwal and Mr Gandhi.

"Even if BJP is not in power, nobody can separate Kashmir from India. When the Modi government gave a befitting reply to Pulwama attack, both Rahul and Kejriwal were crying as if their cousins were killed. If Pakistan fires bullets, we will reply with cannon balls," he said.

The BJP chief also drew parallel between Prime Minister Narendra Modi and Congress chief Rahul Gandhi and said while the PM has never taken a vacation, "Gandhi leaves for holiday as soon as the temperature rises and even his mother can't find him."