Asked about the delay in announcing her candidature, Sumitra Mahajan, an eight-time MP from Indore, said that BJP leaders might be having "something" on their mind. 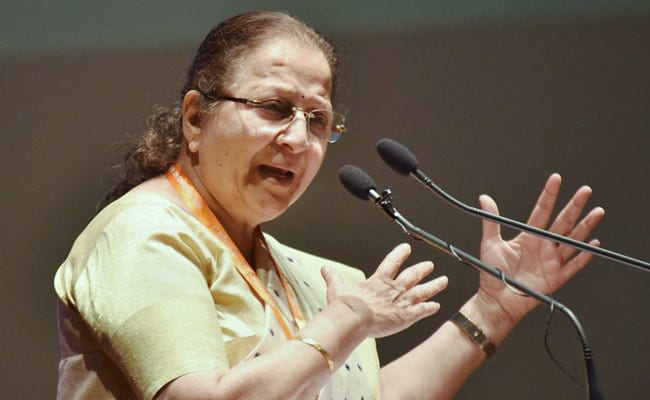 Sumitra Mahajan said the BJP has been fielding her from Indore on its own. (File photo)

As suspense continued over the BJP's nominee from Indore constituency, Lok Sabha Speaker and local MP Sumitra Mahajan Tuesday said she never sought poll ticket from the party in the last three decades.

Asked about the delay in announcing her candidature, the eight-time MP from Indore told PTI that BJP leaders might be having "something" on their mind.

The BJP has not fielded many of its veterans, including former presidents LK Advani and Murli Manohar Joshi, in the Lok Sabha elections.

There is speculation that Ms Mahajan, who turns 76 on April 12, may also not be renominated.

Mr Advani, 91, and Mr Joshi, 85, were not renominated from their Lok Sabha seats, Gandhinagar and Kanpur, respectively.

Mr Advani has been replaced with BJP chief Amit Shah.

Ms Mahajan, the second woman to be Lok Sabha Speaker, said the BJP has been fielding her from Indore on its own.

"I did not seek ticket from the Indore seat in 1989 when I first contested the Lok Sabha elections. The party on its own made me its candidate. I have never demanded my nomination," Ms Mahajan said.

Ms Mahajan said only the party can say who will contest from Indore, a commercial hub and the largest city in Madhya Pradesh.

The veteran parliamentarian said she has not talked to any BJP leader and sought to know the reason for delay in announcing the party nominee for Indore.

Ms Mahajan said there is nothing wrong in names of local leaders being discussed in party circles as probable nominees.

"It is a good thing and natural. The party should have many alternatives as this proves its strength. This means that the party is having a good number of workers, and if anyone among them is picked, he would win elections," she said.

Ms Mahajan said she would be proud if other leaders are being discussed for the electoral contest, "as I am part of the party".

An election is fought by the party and not by an individual, she said.

"The individual just helps. Right now our aim is to form the government again under Prime Minister Narendra Modi with a majority," she said.

Polling for the seat is scheduled on May 19.