The Congress did not allow even a photograph of BR Ambedkar in the Parliament for decades,PM Modi alleged. 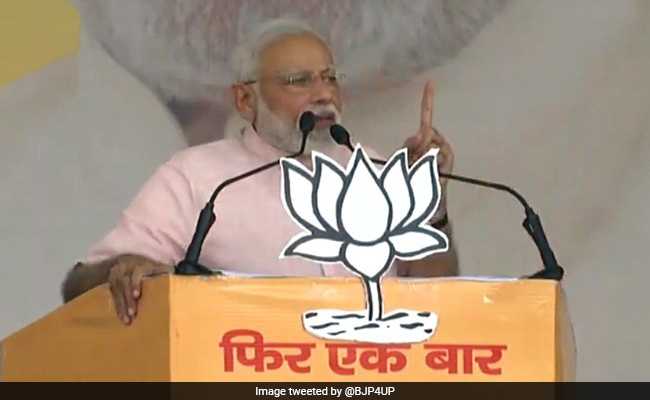 PM Modi accused the Congress of insulting BR Ambedkar at a rally in Amroha, UP.

Accusing the Congress of insulting Babasaheb Bhimrao Ambedkar, the author of the Indian Constitution, Prime Minister Narendra Modi said today that he had challenged "the family" and paid for it because its generations continued to avenge him.

Addressing the Bharatiya Janata Party's (BJP) Vijay Sankalp Rally in Uttar Pradesh's Amroha ,PM Modi said: "It is the compulsion of the vote bank that has forced the Congress to remember Babasaheb now. Otherwise, this party did not allow even a photograph of him in the Parliament for decades."

Elaborating on the BJP government's achievements, the Prime Minister said: "The vote bank politics has done great damage to the country. Goondaism was rampant and law and order absent in western Uttar Pradesh till a few years back.

"Criminal elements were free to roam around during the Samajwadi Party rule, but they have been reined in after the BJP came to power."

The Prime Minister also thanked the government of United Arab Emirates (UAE) for selecting him for the prestigious Zayed Medal, the UAE's highest civilian honour.

"This is not an honour for Modi, but for the people of India. You are the reason for India's growing respect in the world, not Modi," he said.