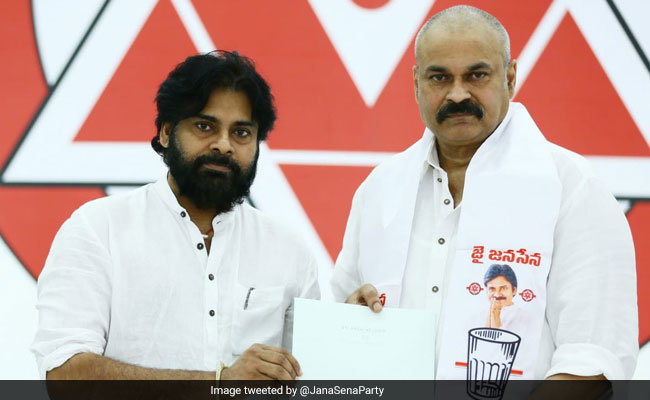 Naga Babu formally joined the Jana Sena in the presence of his younger brother.

K. Nagendra Babu, popular as Naga Babu, is also an actor and producer. He formally joined the Jana Sena in the presence of his younger brother, who welcomed him into the party fold with a party scarf.

Speaking on the occasion, Mr Kalyan said it was because of Naga Babu that there was political awareness in him. He exuded confidence that his brother would win the election from Narsapuram.

Naga Babu said Mr Kalyan was his leader and he would do whatever his leader wants.

Both Naga Babu and Mr Kalyan had campaigned for the Praja Rajyam Party (PRP) floated by their eldest brother and superstar K. Chiranjeevi in 2008. They, however, did not contest the elections while Chiranjeevi had entered the fray from two Assembly constituencies.

In the 2009 election, PRP could win only 18 seats in the then 294-member Assembly of undivided Andhra Pradesh. Mr Chiranjeevi subsequently merged the PRP with the Congress party and became a minister in the Congress-led UPA-II government at the Centre.

Mr Kalyan formed the Jana Sena in 2014 when Andhra Pradesh was bifurcated. In the elections held the same year, Mr Chiranjeevi campaigned for the Congress while Kalyan supported the Telugu Desam Party-Bharatiya Janata Party alliance.

Following the Congress party's humiliating defeat in Andhra Pradesh, Mr Chiranjeevi distanced himself from politics and made a comeback in the film industry.

Mr Kalyan had on Tuesday announced that he will contest Assembly elections from two constituencies - Bhimavaram and Gajuwaka.

Elections to the 175-member Assembly and all 25 Lok Sabha seats are scheduled on April 11.