The mahamilawat gathbandhan, which has leaders and political parties of different ideologies, can only promise political instability, said Arun Jaitley in his seventh blog on "Agenda 2019". 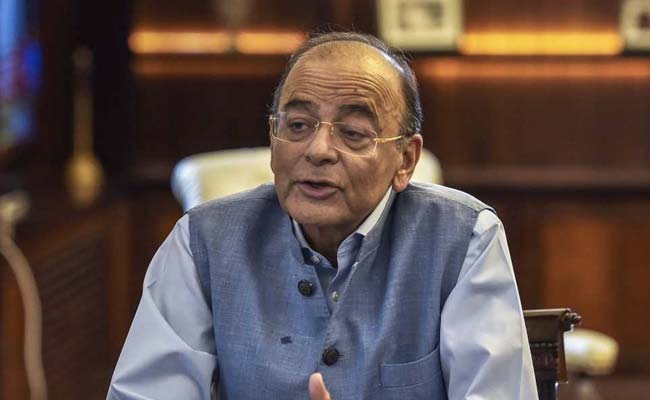 Finance Minister Arun Jaitley Sunday exuded confidence that people will make the right choice in the forthcoming general elections by electing a stable government rather than "mahamilawat gathbandhan", which is being envisaged as a road to disaster.

The mahamilawat gathbandhan, which has leaders and political parties of different ideologies, can only promise political instability, said Mr Jaitley in his seventh blog on "Agenda 2019".

"At the cusp of history, India and Indians have a choice to make. Are they electing a six month Government or a five year Government? Are they choosing between a tried, tested and a performing leader or a chaotic crowd of non-leaders?

"Is India looking at a Government which accelerates growth, development and poverty alleviation or is it looking for a Government made by persons who excel only at self-enrichment? I am confident that aspirational people of an evolving society will make the right choice," said Mr Jaitley who is also the head of the publicity wing of the Bharatiya Janata Party (BJP).

Mahamilawat gathbandhan, being formed with the objective of ousting Prime Minister Narendra Modi, "is a road to disaster. It is a race to the bottom," said the minister.

Mr Jaitley said while in the NDA government, the last word belonged to the Prime Minister, there is a "tug of war" on the issue of leader in the coalition proposed by the opposition parties, including Congress, Bahujan Samaj Party, Samajwadi Party, Trinamool Congress, and Telugu Desam Party.

"Four people have clearly indicated their desire to be Prime Ministers - Shri Rahul Gandhi, Behan Mayawati, Mamata Didi and Shri Sharad Pawar. Each desires to expand his or her own base and reduce that of the competitor," the minister said in the blog.

He further said that the gathbandhan unquestionably promises only political instability.

Such non-ideological alliances have only lasted for a few months, he said while citing examples of governments headed by Chaudhary Charan Singh, VP Singh, Chandrasekhar, HD Deve Gowda and IK Gujral, which did not last full term.

"Who would want to invest in India in an environment of political instability? Would even Indian investors prefer to go outside and look for more stable countries for investment? Where there is instability, there is corruption.

"People with brief political opportunities make the best of them. This is the experience of the past," said the senior BJP leader.

Mr Jaitley further said federalism in India is inherent both geographically and constitutionally.

The Constitution defines "India" that is ''Bharat - a Union of States''.

The states must be fiscally strong. This is the essence of Indian federalism.

Equally, if not more important, is the fact that for India to be a Union of States, there must be a strong Union, he said, adding if there is no strong Union, both India and India's federalism will stand to suffer.

He said the framers of the Constitution had a vision and they were men of wisdom.

When prominent areas like defence, sovereignty, security of India, foreign policy and eventually the war against terror were maintained as primary responsibility of the Union Government, can India be ever defended without a strong Union? he wondered.

"There can be no 'federal front' without a strong Central party," Mr Jaitley said, adding that in the both the NDA governments the nucleus of the coalition was a large party.

"There was no completion for leadership. The last word belonged to the Prime Minister. That is how the two Governments functioned. There was clarity in terms of policy and the Government had capacity to take difficult decisions and deliver," he said.

The minister further said that today we have reached a situation where India grows faster than others in the world.

"The essential pre-requisite for accelerating our movement in this direction is that India must have political stability, a clear policy direction, a strong and decisive leadership. If we falter on any one of these, we will be letting down our own people and future generations. India cannot afford lost opportunities at this stage," he said.

About 900 million Indians would start voting from April 11 to elect the next government in a seven-phased elections. The votes are scheduled to be counted on May 23.