The actor-turned-politician, who has been once again fielded by the BJP from the Mathura constituency, filed her nomination papers for the upcoming Lok Sabha elections earlier this week. 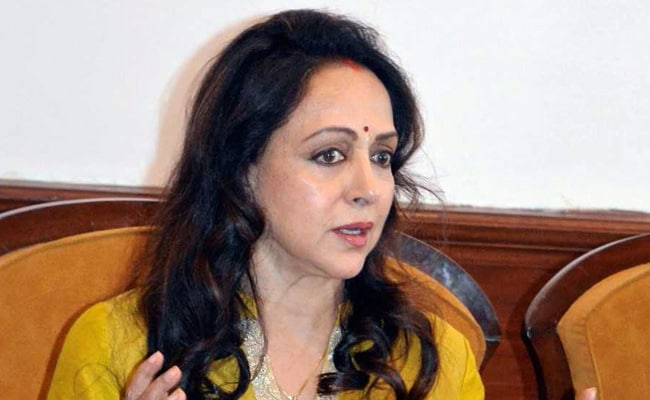 "I am not a hardcore politician and I want to limit myself to Mathura only," Hema Malini said.

Dubbed an "outsider" by the Opposition, BJP lawmaker Hema Malini has said she has a "divine connection" with Mathura, the city of Lord Krishna, and has no intention of becoming a minister.

The actor-turned-politician, who has been once again fielded by the BJP from the Mathura constituency, filed her nomination papers for the upcoming Lok Sabha elections earlier this week.

The ''mahagathbandhan'' (grand alliance) of Samajwadi Party, Bahujan Samaj Party and Rashtriya Lok Dal has said that Mathura will witness an "outsider vs Brijwasi" battle as Hema Malini lives in Mumbai.

"Yes, I have a house in Mumbai. What is the problem with that? I have a house here also and I am a Virndavanwasi," she told news agency PTI in an exclusive interview.

"I am so involved with the city. I feel some divine connection here. I have been playing Radha and Meera throughout my life and I was in a temple only when my candidature was announced," she said.

The BJP lawmaker said she will fulfil her professional commitments as an actor. "In the last five years I have come here more than 250 times. People should understand that I am not just an MP and I have to use my talent as an actor as well. There is no need for me to be here 24 hours. I come and get things done in 10 days," she said.

"I really feel hurt when someone asks ''apne kya kaam kiya?'' (what work did you do). The first two years were difficult as I could not communicate (with the people). But in the last two years I was able to get things done with the support of the Centre and the state government," she said.

"I am not a hardcore politician and I want to limit myself to Mathura only. I am asked many times if I want to become a minister and it sounds so strange. Being a minister is a full-time responsibility," Hema Malini said.