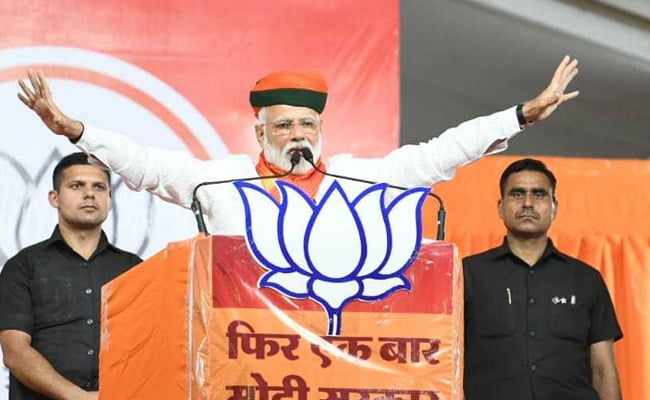 Bahujan Samaj Party chief Mayawati continued his attack on Prime Minister Narendra Modi and said his ship is sinking. The attack came a day after she had said PM Modi was shedding "crocodile tears" over Alwar gangrape.

Prime Minister Narendra Modi will address back-to-back rallies in Uttar Pradesh, Bihar and Punjab days before the final phase of polling is held in these states. He will hold public meetings at Ballia in Uttar Pradesh, Buxer and Sasaram in Bihar, and Chandigarh in Punjab, all of which will witness polling in the last phase of elections on May 19.

Congress chief Rahul Gandhi is also scheduled to hold rallies in  in Neemuch, Khandwa and Tarana districts of Madhya Pradesh.

In the seventh phase, 59 Lok Sabha seats will vote on May 19.

Here are the live updates of Lok Sabha elections 2019

May 14, 2019 20:48 (IST)
BJP chief Amit Shah's mega rally in Kolkata, that wowed residents with scale and street-party air, ran into trouble later this evening. Clashes broke out and the police stepped in and used batons on the crowds. Videos from the spot showed chaotic scenes -- people dressed in saffron throwing stones as others run helter-skelter. Police said some people have been arrested.

May 14, 2019 16:58 (IST)
"These 'mahamilavati' people SP, BSP and the Congress, all are abusing me. Not a single day has passed when they have not abused me. This is their condition after the sixth phase of the election. I consider their abuses as a gift. I will not reply to them, you (public) will reply by voting for the BJP": PM Modi at a rally
May 14, 2019 16:31 (IST)
"This time when I came for the roadshow, you assured me that you will handle everything. I have faith in every word. For me, these were not mere words, but a promise. I know that every citizen of Kashi is himself fighting elections for and as Narendra Modi," PM Modi said.
May 14, 2019 16:29 (IST)
In the video message, PM Modi said, "I only want to say that in 2019, everyone must participate in the biggest celebration of democracy. You should also encourage your friends and relatives to vote. The whole country will be looking towards Kashi on that day. Go out in large number, wear your traditional clothes, and celebrate the day of voting with joy and fervour. Kashi has to make a new record now when the whole country is looking towards it. The record of the whole country should be broken by Kashi".
May 14, 2019 13:27 (IST)
Watch: PM Modi's Message To Voters In Varanasi

May 14, 2019 13:26 (IST)
Congress chief Rahul Gandhi took a jab at PM Modi today. "Modi ji, whenever it rains in India, do all aircraft disappear from radar," he said. He was referring to PM's interview where he made a remark on the Balakot airstrike.
May 14, 2019 13:05 (IST)
BJP Launches "Knock The Door" Campaign In Varanasi
The BJP has launched "Knock the door" campaign in Varanasi, which votes in the final phase of national election on May 19. The Bharatiya Janata Party workers have been directed to knock on every door and seek votes for Prime Minister Narendra Modi and urge people to cast their votes on the polling day.
May 14, 2019 12:59 (IST)
Prime Minister Narendra Modi today while addressing a rally in Uttar Pradesh's Ballia said: "These 'mahamilavatis' are asking 'what is Modi's caste?'. I've been CM of Gujarat for a longer time than both 'Bua-Babua' combined have been CM. I've contested & helped many, in contesting elections, but never used my caste for support."
May 14, 2019 12:21 (IST)
Rajnath Singh Takes Jibe At Opposition
"The Congress and other opposition parties keep targeting us, but have no real issues to target us on. In 2014, it was Modi vs Manmohan Singh-Sonia Gandhi... but in 2019, who is that one person who can stand opposite Modi? No one..." Home Minister Rajnath Singh said today at a press conference.
"We have performed on several fronts.... Be it upliftment of the poor, improving the standard of living - be it sanitation, better infrastructure, healthcare, etc... We have also performed well on making the country more secure and have performed well in the international fora too..." he added.
May 14, 2019 11:13 (IST)
BSP chief Mayawati today targeted PM Modi saying his government's boat is sinking and RSS abandoning it is a proof.
PM Modi RalliesRahul Gandhi ralliesMayawati On PM