How The Muslim Vote In Bengal May Play Out: Prannoy Roy's Analysis

Lok Sabha Election 2019: This is the most polarised election the state has seen, where the bulk of sparring has been between Prime Minister Narendra Modi and Mamata Banerjee.

The battle for Bengal's 42 seats is proving one of the toughest this election, with the BJP aiming for 23 seats and chief minister Mamata Banerjee determined not to cede any. This is the most polarised election the state has seen, where the bulk of sparring has been between Prime Minister Narendra Modi and Mamata Banerjee. The BJP, however, has left nothing to chance. Party chief Amit Shah and Uttar Pradesh Chief Minister Yogi Adityanath have also campaigned regularly in the state. 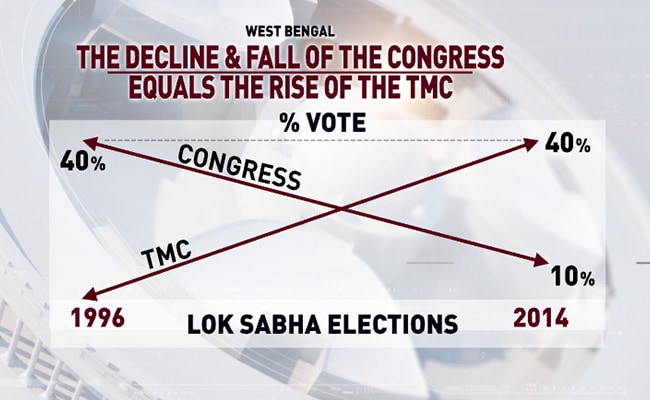 Similarly, the decline of the Left had meant the rise of the BJP between 2011 - when the Trinamool ended over three decades of Left rule - and 2014. The BJP's votes have increased by 13 per cent and the Left's have declined by 12 per cent. 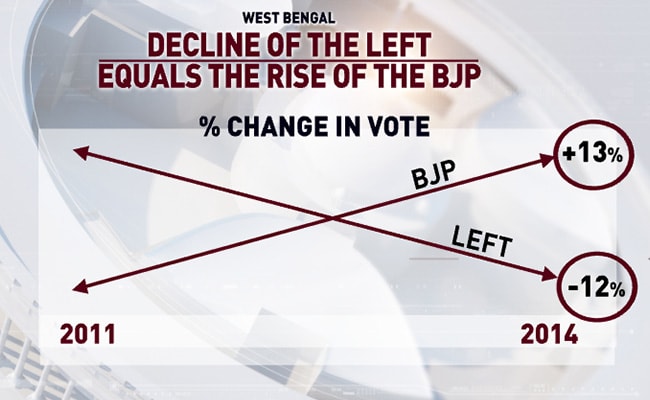 The state is voting in all rounds of the seven-phase election. The BJP's strongest areas have voted in the first two rounds and the Congress's strongholds have voted in phase three. Many of the areas where the Trinamool dominates are covered in the last four phases. 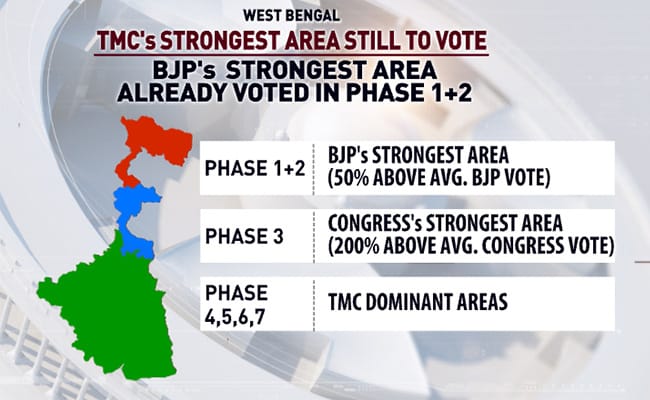 What makes the Bengal election interesting this time is a voter population that is sharply divided along the lines of age group, religion, caste and gender.

Trends analysed by Prannoy Roy and his team show that the Muslim votes are significantly divided in Bengal, where their population is twice (28 per cent) that of the rest of India (14 per cent). 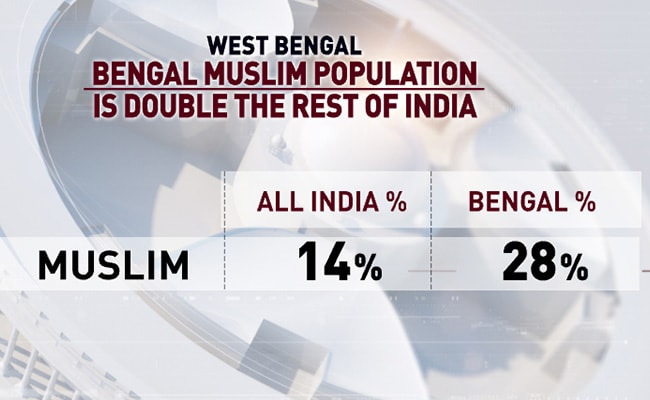 In the last national election, the Trinamool Congress won 40 per cent of the Muslim votes, the Left 30 per cent, the Congress 20 per cent and the rest, eight per cent. 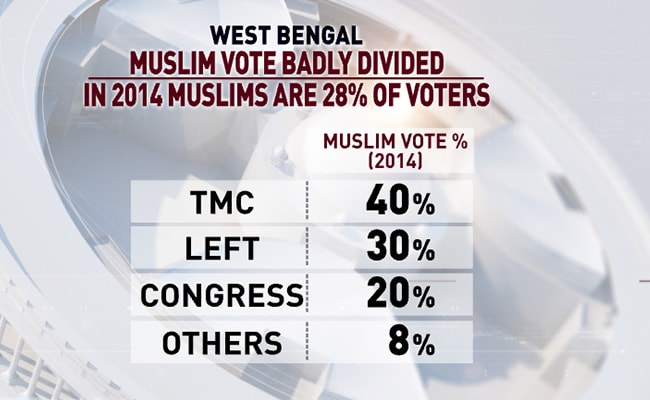 In this election, trends show that the Muslim vote is less divided. The Trinamool, which is seen to have taken a number of measures for Muslim voters, is likely to have 70 per cent of the community's votes, show trends. The Congress has 20 per cent and the Left has just five per cent. 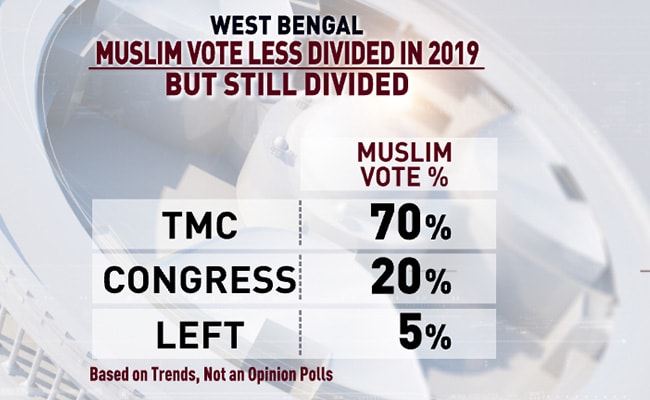 The Muslim population in Bengal is spread across the state instead of pockets. Data shows that Mamata Banerjee's party has done better in seats that don't have a high Muslim population. In 2014, the Trinamool won 27 per cent of the votes in seats where there were more than 20 per cent Muslims.

With the BJP's aggressive campaign and efforts to make inroads in the state, the Trinamool may face a Hindu consolidation backlash, say analysts. 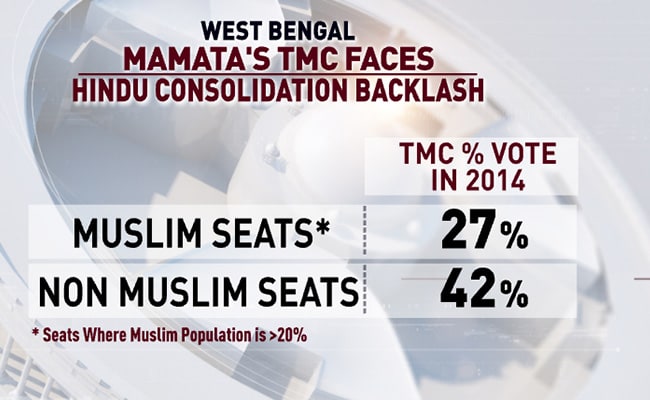 Trends also suggest that the Trinamool support base is higher in rural areas than the urban. The upper caste voters lean more towards the BJP while the adivasis are more for Mamata Banerjee, indicate trends. 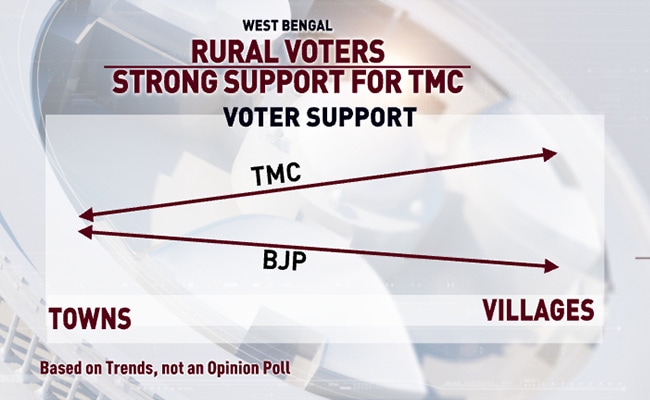 The younger voters, who are between 18 and 23, support the BJP much more, according to trends. The Trinamool, however, has a stronger support base among voters between 33 and 50 years.

As for the bellwether seats, those which have voted the same way as the winner in the state, there are eight in Bengal - Birbhum, Hooghly, Barrackpur, Uluberia, Basirhat, Tamluk, Diamond Harbour and Mathurapur. 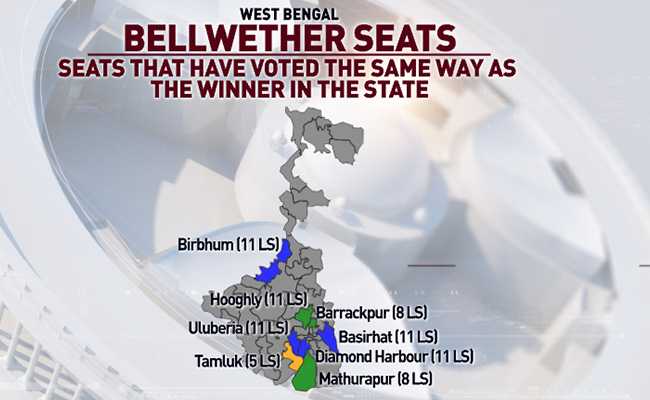 Asansol, a seat that had made headlines over its high profile candidates - Union Minister Babul Supriyo and Trinamool's Moon Moon Sen - is the "Ulta (reverse) bellwether", which means it has never voted the same way as the winner. So is Darjeeling.