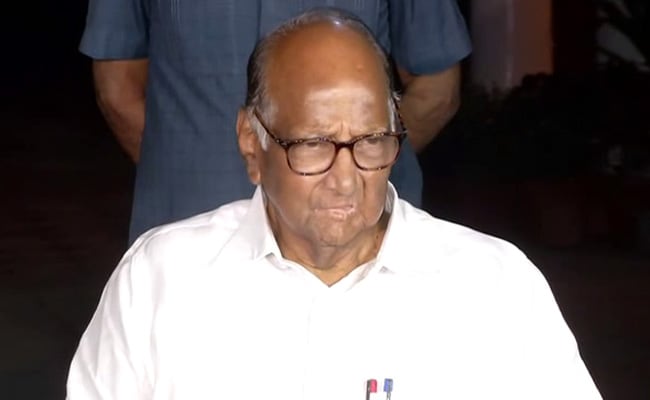 Sharad Pawar and Sonia Gandhi will meet at 4pm in New Delhi today.

Nationalist Congress Party (NCP) leader Sharad Pawar, after meeting with Congress president Sonia Gandhi at her home in Delhi today, said more discussions would be held before a final word on getting together with the Shiv Sena to form government in Maharashtra. "We have to sort out some more issues," Sharad Pawar told reporters. With leaders from both parties denying any decision, the biggest hint of an alliance in the making was seen in the gesture by the Congress and NCP not to put up candidates for the post of mayor or deputy mayor in the Brihanmumbai Municipal Corporation (BMC) elections. The cash-rich Mumbai civic body is controlled by the Shiv Sena.

Here are the LIVE updates from Maharashtra:

Sh. Sharad Pawar met the Congress President today and briefed her on the situation in Maharashtra. It was decided that in a day or two, representatives from NCP & Congress will meet in Delhi to discuss the way forward

Nov 18, 2019 17:35 (IST)
I had talked to Sanjay Raut ji about a compromise. I suggested to him a formula of 3 years (chief minister from BJP) and 2 years (chief minister from Shiv Sena) to which he said that if BJP agrees then Shiv Sena can think about it. I will discuss this with BJP, said Union Minister Ramdas Athawale.
Nov 18, 2019 17:33 (IST)
NCP chief Sharad Pawar arrives at Sonia Gandhi's residence

Nov 18, 2019 14:03 (IST)
Sharad Pawar's Response On Shiv Sena
Asked about the Shiv Sena saying it was in talks with the NCP to form government, NCP leader Sharad Pawar says: "Really?"
"Do you think the Shiv Sena-NCP-Congress government will happen," Mr Pawar was asked by reporters in Delhi. "Shiv Sena-BJP contested separately, NCP-Congress contested separately, how can you say that? They (BJP-Sena) have to find their own way. We will do our own politics," said the 79-year-old.
Nov 18, 2019 12:17 (IST)
Sharad Pawar Reaches Delhi
Nationalist Congress Party (NCP) chief Sharad Pawar arrivs in Delhi to hold a meeting with Congress Interim President Sonia Gandhi to discuss the prospects of government formation in Maharashtra.
"There is a meeting today," says Mr Pawar.
The NCP held a core committee meeting at party chief Sharad Pawar's residence in Pune on Sunday. Maharashtra NCP chief Jayant Patil and Legislative Party leader Ajit Pawar were among the prominent leaders present at the meeting.
Nov 18, 2019 09:37 (IST)
After Meet With Congress, Things Will Speed Up: NCP Leader
NCP leader Nawab Malik tells news agency ANI: "Today, there is a meeting between NCP President Pawar ji and Congress President Sonia Gandhi. Once it is decided in the meeting today on how to go ahead, definitely everything will speed up and there will be an alternate government in Maharashtra."
Sharad Pawar on Saturday said the three parties will form government and complete a full term. Hours after his announcement, senior Congress leader Mallikarjun Kharge had said discussion over government formation would be taken forward at a meeting between Mr Pawar and Sonia Gandhi.