The Bengal doctors have been on a strike since Tuesday, after a junior doctor was assaulted at a government-run hospital in Kolkata by the relatives of a patient who died. 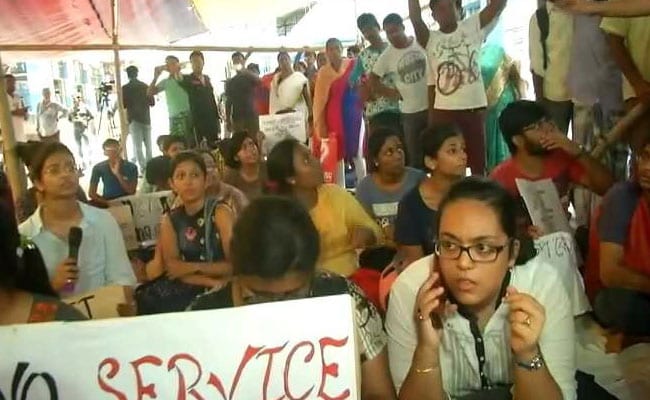 The doctors' protest that started in Kolkata has now spread to Delhi, Mumbai and other cities in India.

The Indian Medical Association has called for a nationwide strike protesting the attack on a doctor in Kolkata.

Doctors in Delhi, Mumbai and Hyderabad have called for a statewide protest against the recent assault on Kolkata resident doctors. The Bengal doctors have been on a strike since Tuesday, after a junior doctor was assaulted at a government-run hospital in Kolkata by the relatives of a patient who died.

The "Emergency services will function normally as the resident doctors will purportedly continue to work in the emergency services as per their scheduled duties," said AIIMS medical superintendent DK Sharma.

The junior doctors' strike, has hit services in the state's government-run hospitals. Over the last four days, services have been affected in emergency wards, outdoor facilities and pathological units of many state-run hospitals and a number of private medical facilities. West Bengal Chief Minister Mamata Banerjee on Thursday asked agitating junior doctors across the state to resume work within four hours and warned them of action if the order is not followed. She directed police to vacate hospital premises, asserting that no one other than the patients should be allowed on the campus.

Here are the highlights of the Doctor's protest across India:

Jun 14, 2019 23:41 (IST)
Mamata Banerjee invites agitating doctors for meeting at state secretariat to resolve impasse, doctors refuse.
Jun 14, 2019 20:39 (IST)
West Bengal Governor, Keshari Nath Tripathi: I have tried to contact the CM, I have called her, till this moment there is no response from her, if she calls on me then we will discuss the matter. I have called her, let her come.
Jun 14, 2019 19:51 (IST)
Bengal doctors' strike- Here are 10 latest developments in this big story:
Jun 14, 2019 19:00 (IST)
Health Minister Harsh Vardhan has sent a letter to Mamata Banerjee: 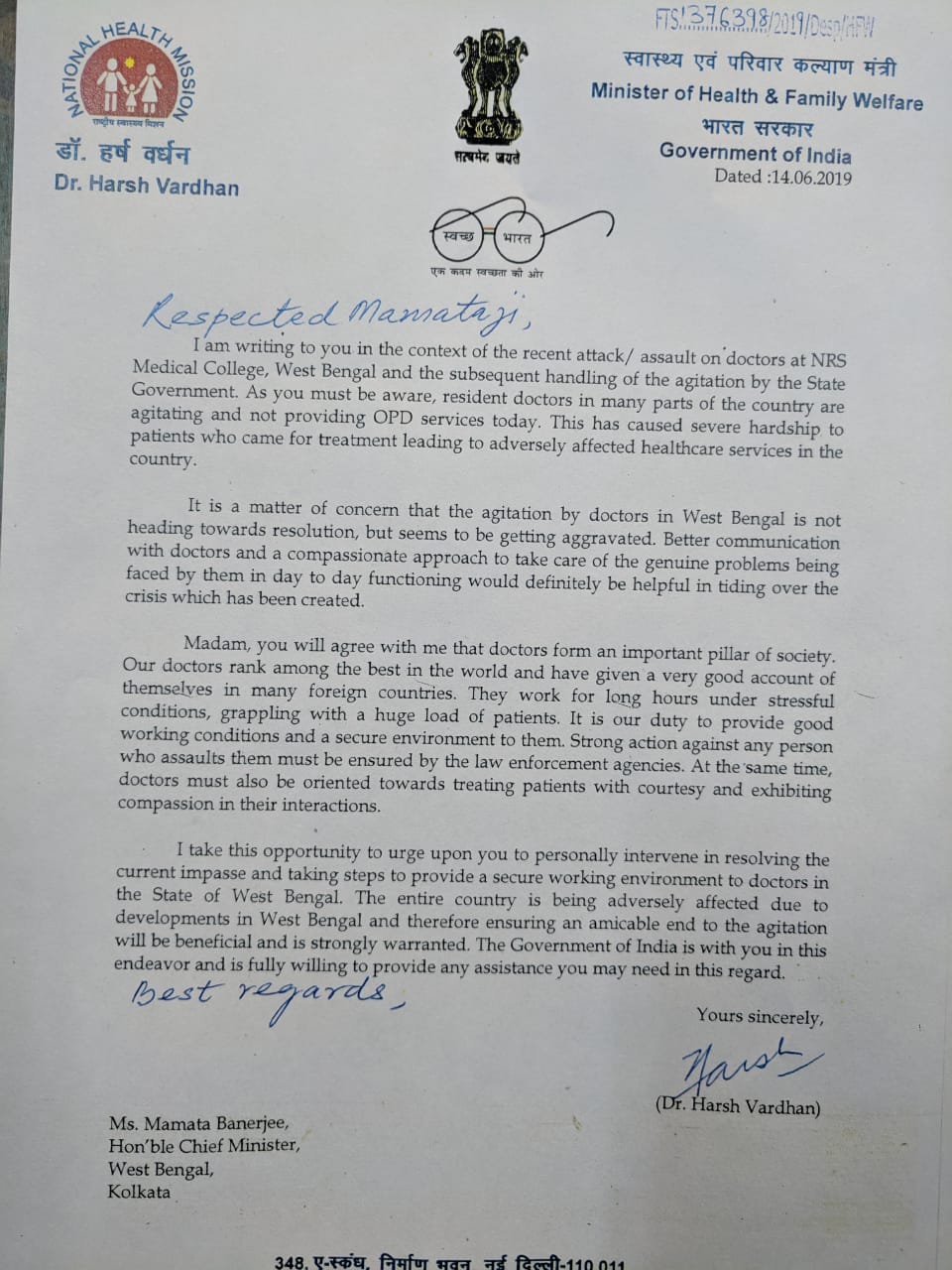 Jun 14, 2019 18:57 (IST)
Senior doctors Sukumar Mukherjee, Makhan Lal Saha, Avhijit Choudhury, Alakendu Ghosh along with Nirmal Majhi reach State Secretariat Nabanna to meet Mamata Banerjee to try and resolve the issue of junior doctor's strike.
Jun 14, 2019 18:48 (IST)
300 doctors have tendered their resignation in government-run hospitals in Bengal.
Jun 14, 2019 18:47 (IST)
Calcutta High Court gives 7 days to West Bengal govt to respond while hearing a PIL on doctors' strike in the state. Court asked state what steps were taken by the govt to end the impasse. Court also said that state will have to put an end to this & find a solution, reports news agency ANI.
Jun 14, 2019 18:08 (IST)
Bengal Education Minister Appeals To Junior Doctors To Withdraw Strike
Senior Trinamool Congress leader West Bengal Education minister Partha Chatterjee appealed to striking junior doctors to "keep aside" misunderstandings and withdraw their agitation, which entered its fourth day on Friday.
In a Facebook post, Mr Chatterjee, the TMC secretary general, said that all their grievances can be solved through discussions with the government.

"I would like to appeal to my young friends to keep aside misunderstandings and join back at work. We should not lose faith on masses. I too have been involved in student politics and now after being appointed in a position, still believe that all of us should work towards serving the masses.

Doctor Strike: Government Blames Mamata Banerjee As Doctors' Protest Spreads - 10 Points
Doctors across the country will boycott work on Monday to express solidarity with their Bengal counterparts whose strike to protest the attack on an intern at a government-run hospital in Kolkata entered its fourth day. Junior doctors in several states boycotted work today affecting medical services. Blaming the Mamata Banerjee government for the doctors' strike in Bengal, Union Health Minister Harsh Vardhan appealed to her to "not make it a prestige issue". He also assured doctors across the country that the government is "committed to ensuring their safety". Meanwhile, the striking doctors have said they want an unconditional apology from Ms Banerjee to withdraw their protest, according to news agency PTI."
Jun 14, 2019 15:37 (IST)
BREAKING: Indian Medical Association to hold nationwide strike on June 17.
Jun 14, 2019 15:15 (IST)
West Bengal Chief Minister Mamata Banerjee said We have to bring Bengal forward. When I go to Bihar, UP, Pujnab, I speak in their language, if you are in Bengal you have to speak Bangla. I will not tolerate criminals who stay in Bengal and roam around on bikes.
Jun 14, 2019 13:57 (IST)
Calcutta High Court refuses to pass interim order on strike by junior doctors in state-run hospitals, asks West Bengal government to persuade them to rejoin work.
Jun 14, 2019 13:37 (IST)
16 doctors of the RG Kar Medical College & Hospital Resigned
West Bengal: 16 doctors of the RG Kar Medical College & Hospital, Kolkata submit their resignation stating, "In response to prevailing situation as we are unable to provide service, we would like to resign from our duty,"

West Bengal: 16 doctors of the RG Kar Medical College & Hospital, Kolkata submit their resignation stating, "In response to prevailing situation as we are unable to provide service, we would like to resign from our duty," pic.twitter.com/a3eVzs6ZLG Jun 14, 2019 11:54 (IST)
Union Health Minister Dr Harsh Vardhan today blamed Mamata Banerjee for the nationwide protests by doctors against the attack on a junior doctor in West Bengal earlier this week. Doctors in several cities across the country are staying away from work today to show support to their colleagues in West Bengal who have been on a strike since Tuesday. "I appeal with folded hands to West Bengal Chief Minister Mamata Banerjee to not make this an issue of prestige. Instead of taking action against the attackers(of the doctor), she(Mamata Banerjee) gave the doctors an ultimatum, warned and threatened them because of which doctors of West Bengal and across the country are angry," Harsh Vardhan said. He urged the doctors to hold only symbolic protests so that the health services are not disrupted.
Jun 14, 2019 11:54 (IST)
Doctors' Demands From Health Minister Dr Harsh Vardhan
Redefine the laws for Doctor Protection Act or Create a new one as Anti- Hospital violence Act defining strictly. "Assualt to doctor", should be an unbailable offense.  Mob lynching to doctors ; laws to be redefined, Punishment should be grave. Right to Blacklist assailant's whole family from health care. Central Government to make out a strict plan of action for tightening Health care delivery system for safe working environment, rather then focusing only on Global health policies, focus on health care providers needs first.
Jun 14, 2019 11:27 (IST)
READ HERE| Bengal Doctors' Protest Spreads, Health Services Hit In Delhi, Mumbai 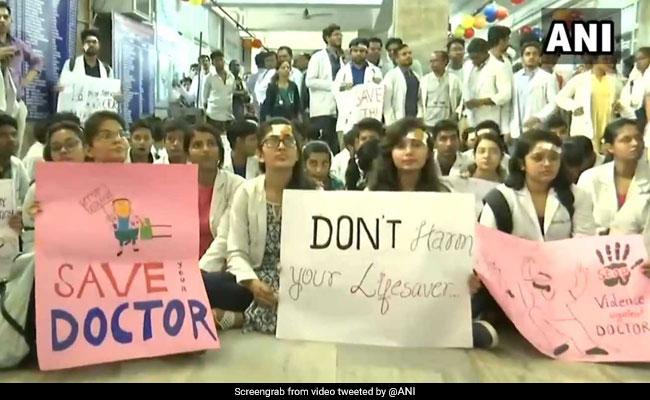 Jun 14, 2019 11:01 (IST)
Doctors' Refuses Mamata Banerjee's Ultimatum
During a visit to a state-run hospital in Kolkata, Mamata Banerjee warned doctors who won't return to work. Doctors who don't return to work must leave the hostel, she said. "They are outsiders. The government will not support them in any way," she said. "I condemn doctors who have gone on strike. Policemen die in line of duty but the police don't go on a strike," she added.  She has accused the BJP and the CPM of engineering the strike and playing "Hindu-Muslim politics".
Jun 14, 2019 10:48 (IST)
The doctors are protesting after two of their colleagues were attacked and seriously injured at the NRS Medical College and Hospital in Kolkata by a mob following the death of a patient. 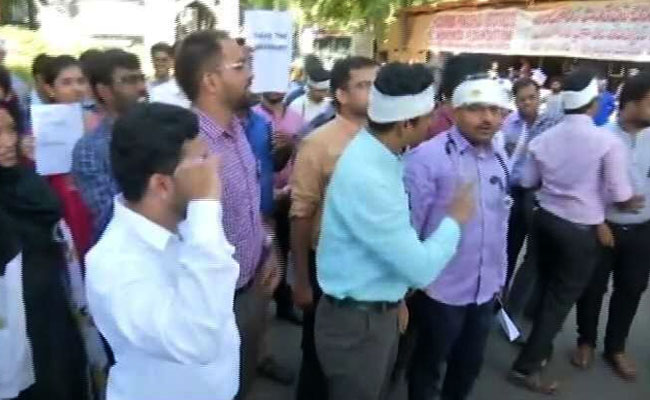 Jun 14, 2019 10:45 (IST)
The Indian Medical Association (IMA), on the other hand, directed members of its state branches to stage protests and wear black badges in solidarity with West Bengal doctors tomorrow. It will also ask Prime Minister Narendra Modi and Union Home Minister Amit Shah to bring out a central law against such violence.
Jun 14, 2019 10:45 (IST)
Pan India Strike
Healthcare services spreads across India; services in Delhi, Mumbai, Hyderabad Hit. "Emergency services will function normally as the resident doctors will purportedly continue to work in the emergency services as per their scheduled duties," AIIMS medical superintendent DK Sharma said in a statement. He said inpatent wards, labour and maternity care faciltiies will function normally. The outpatient department and diagnostic services  will largely remain suspended today.
Jun 14, 2019 10:27 (IST)
Attack on Doctors
Junior doctors in West Bengal are on a strike since Tuesday after two of their colleagues were attacked and seriously injured at the NRS Medical College and Hospital in Kolkata. Demanding security in government hospitals, the striking junior doctors refused to end their stir.