The veteran Congress leader and three-time Chief Minister died on July 20 last year after suffering a cardiac arrest. She was 81. 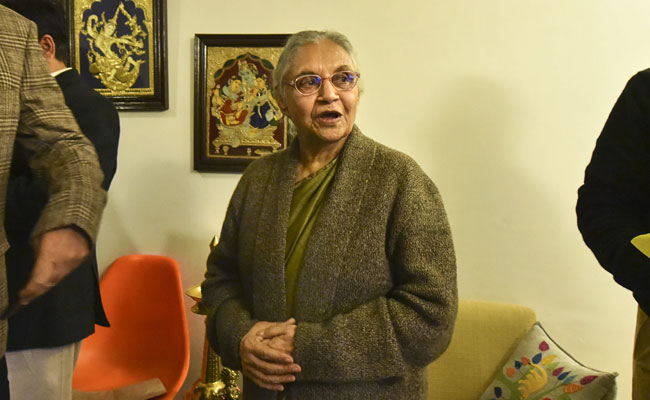 Sheila Dikshit died on July 20 last year after suffering a cardiac arrest. She was 81.

The Congress remembered the developments efforts taken by Sheila Dikshit during her 15-year rule in Delhi. Her untiring efforts helped Delhi become pollution-free and also win the 'The Most Competitive City State' award, it said.

"Mrs. Sheila Dixit's Delhi won the 'The Most Competitive City State' award, beating the other city-states of the country. Delhi is remembering her development work on Sheila ji's death anniversary. Sheila ji's contribution to the construction of modern Delhi is unforgettable," the Congress tweeted.

Sheila Dikshit served as chief minister of Delhi for three consecutive terms, from 1998 to 2013.

Priyanka Gandhi Vadra, in her tribute, said that the Congress leader gave a new direction to development in Delhi.

"As Chief Minister of Delhi, late Sheila Dixit ji gave a new direction and new height to the development of Delhi. I pay my tribute to the humble and serious leader on her death anniversary," she wrote in Hindi.

Sheila Dikshit, a loyalist of the Gandhi family, was handpicked by former Prime Minister Rajiv Gandhi to serve in his Cabinet from 1986-89.

Her Delhi Congress colleague, Ajay Maken, called her the people's chief minister'. Mr Maken addressed Sheila Dikshit as "my mentor and my leader" in his tribute to the senior leader.

Former cricketer and BJP MP Gautam Gambhir paid his tribute by tweeting a photo of him with Sheila Dikshit.

BJP MP and former Delhi BJP President Manoj Tiwari remembered his last meeting with the Congress leader last year, just two months before her death. "I wished her good health, not knowing that this would be my last meeting with her Folded hands," Mr Tiwari tweeted.

Sheila Dikshit is credited with changing the face of the national capital. Among her key initiatives for Delhi were buses run on Compressed Natural Gas, inclusion of Resident Welfare Organisations in local governance, focus on infrastructure including roads and flyovers, privatisation of discoms and trifurcation of Delhi's civic body.