Lalu Yadav says in his book that the Bihar Chief Minister wanted to return to the Mahagathbandhan (grand alliance) within six months of quitting it, according to Tejashwi Yadav. 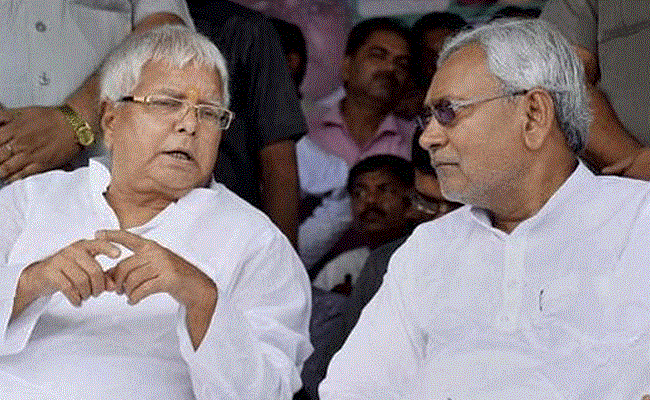 Prashant Kishor acted as an emissary for these talks on five occasions, the book says (File)

Nitish Kumar made "many attempts to rejoin the grand alliance" after ditching it in 2017 and reviving his ties with the BJP, RJD leader Lalu Prasad Yadav has claimed in his soon-to-be-released autobiography "From Gopalganj to Raisina". That claim set off a war of words on Friday starring Lalu Yadav's son Tejashwi Yadav and Nitish Kumar's party man and former poll strategist Prashant Kishor.

Lalu Yadav says in his book that the Bihar Chief Minister wanted to return to the Mahagathbandhan (grand alliance) within six months of quitting it, according to Tejashwi Yadav. "My father has mentioned that Nitish Kumar made many attempts to get back and ally with us. I say this with full responsibility, Nitish Kumar tried many different approaches, that also within six months of returning to NDA," he told news agency ANI.

Prashant Kishor acted as an emissary for these talks on five occasions, the book claims.

Tejashwi, who was Deputy Chief Minister before Nitish Kumar dumped the RJD over corruption allegations against him, said he had proof that Nitish Kumar had tried his best to contact him, Lalu Yadav and even the Congress. "We will not ally with Nitish Kumar ever," he added.

Sources say Prashant Kishor did meet Lalu Yadav and Tejashwi but with a proposal that was unacceptable to both the Yadavs, especially junior. Nitish Kumar had reportedly insisted that Tejashwi be kept out of the state cabinet until he was cleared of the allegations. That would automatically push up Tejashwi's older brother Tej Pratap, who is widely seen to be a lightweight.

Prashant Kishor, said to have advised Nitish Kumar to team up with Lalu Yadav for the 2015 Bihar election, called the claims "bogus" in a tweet.

"The claims made by Laluji as reported are bogus. This is nothing but a poor attempt (at) seeking relevance by a leader whose best days are behind him. Yes, we did meet many times before I joined JD(U), but if I were to tell what all was discussed then he would be quite embarrassed," tweeted Prashant Kishor, vice president of Nitish Kumar's Janata Dal United.

The strategist-turned-politician took a sharp dig at Tejashwi: "Even today, your sole identity and achievement is that you are Laluji's son. That is why you are heading RJD in your father's absence and became deputy chief minister in Nitish Kumar's government. But you will truly have your own identity when you achieve something on your steam."

"It is true, what Lalu Yadav has written in his book about Nitish Kumar making several attempts to join the grand alliance," he told reporters, according to ANI.