The jailed former chief minister, serving sentences in Ranchi in fodder scam cases, came out with a couple of tweets in his native dialect Bhojpuri to take potshots at Mr Kumar. 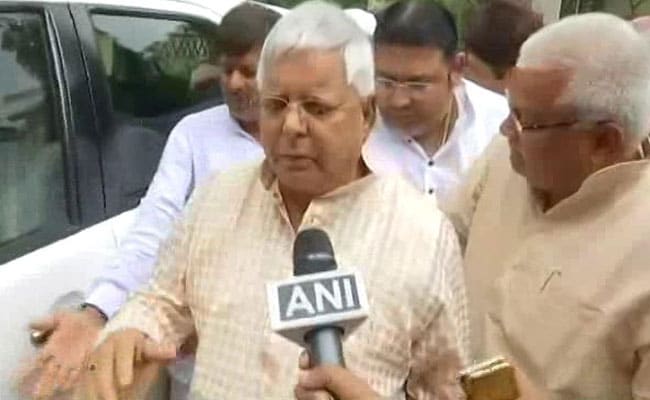 This game of hide and seek will not drive coronavirus away, said his tweet(FILE)

RJD president Lalu Prasad Friday charged Nitish Kumar with remaining cocooned inside his official bungalow in the midst of the coronavirus pandemic, a criticism that prompted a sharp reaction from Chief Minister's deputy and BJP leader Sushil Kumar Modi.

The jailed former chief minister, serving sentences in Ranchi in fodder scam cases, came out with a couple of tweets in his native dialect Bhojpuri to take potshots at Mr Kumar.

"Does a Chief Minister lead from the front or sleep with a blanket pulled over himself? In the four months since the first lockdown, Nitish has not ventured out of his bungalow even four times," said the septuagenarian, whose Twitter account is operated by people close to him.

He alleged that the people of the state have been left to fend for themselves amid the pandemic while the chief minister was busy in "rangai putai" (polishing) of the "mask of his good governance, characterized by unemployment, starvation, corruption and crime".

"This game of hide and seek will not drive coronavirus away. Who will fight the battle if the commander of the army runs away," Mr Prasad added, sharing a tweet from his wife and successor as CM Rabri Devi, who had expressed similar views on the micro-blogging site, albeit in plain Hindi.

Mr Kumar, who is known to be techno-savvy, has remained active politically and administratively through digital mediums like video conferencing.

This has not gone down well with the party founded and headed by Mr Prasad who used to pose as a luddite in his hey days in a bid to underscore his humble roots which had endeared him to the masses.

Meanwhile, Mr Modi, a senior BJP leader who was one of the litigants on whose PIL in the 1990s the Patna High Court had ordered a CBI probe into the fodder scam cases, hit back.

"At a time when the lockdown has been re-imposed because of coronavirus spike and people are being advised to work from home, Lalu Prasad and Rabri Devi are asking Chief Minister Nitish Kumar to go among the people, throwing physical distancing to the winds," Mr Modi, one of the most prolific social media users among politicians in Bihar, tweeted.

The Deputy CM also wondered why the couple did not give similar advice to their younger son and heir-apparent Tejashwi Yadav, who had remained away from the state for a long time after the nationwide lockdown was first clamped.

"Is the RJD wishing the chief minister to become infected with the coronavirus? A party known for its belief in black magic can go to any extent, driven by political envy", remarked Mr Modi.

He was alluding to Shankar Charan Tripathi, a self-styled occultist whom Mr Prasad had appointed as a spokesman of his party a few years ago, but sacked within months.

Sushil Modi also referred to the drubbing received in the Lok Sabha polls last year by the RJD, which failed to win a single seat in the state where the total number was 40, and the torpor exhibited by Tejashwi Yadav later who failed to attend the assembly session soon afterwards, which continued for over a month, despite being the leader of the opposition.

"Why did Lalu-Rabri not tweet at that time, babua, Janata ke beech rah ke chaheen (son, one must remain among the people)", remarked the BJP leader as a parting note, trying his hands at the colorful dialect.

As election for Bihar is approaching, wordy duel between rivals are intensifying.

Lalu Prasad, despite being in jail, keeps taking potshots at Mr Kumar and the BJP to make his presence felt and boost RJD's prospects.