The announcement was made after the West Bengal chief minister and Trinamool Congress (TMC) supremo hosted a tea party for the top leaders of 14 opposition parties who participated in her united opposition rally. 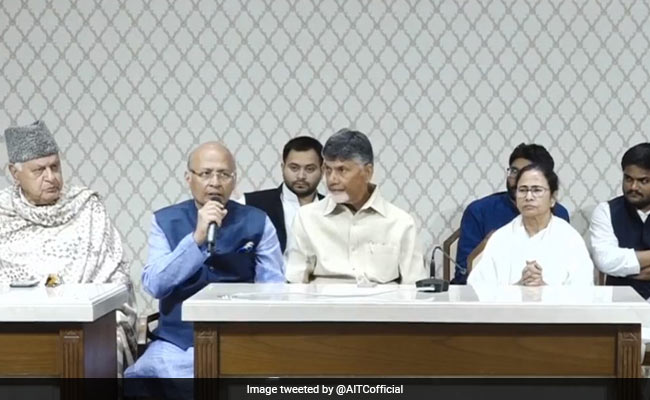 A four-member committee of opposition party leaders has been formed after reports of EVM manipulation by the Bharatiya Janata Party (BJP), Trinamool Congress supremo Mamata Banerjee said on Saturday.

In addition to evaluating the functioning of EVMs and finding ways to stop any malpractice, the committee will suggest electoral reforms to the Election Commission before the Lok Sabha polls, Ms Banerjee added.

The announcement was made after the West Bengal chief minister and Trinamool Congress (TMC) supremo hosted a tea party for the top leaders of 14 opposition parties who participated in her united opposition rally.

The committee, comprising Abhishek Manu Singhvi (Congress), Akhilesh Yadav (Samajwadi Party), Satish Mishra (Bahujan Samaj Party) and Arvind Kejriwal (Aam Aadmi Party) will submit its recommendations to the EC for implementation and will press for wider use of VVPAT, she said.

National Conference (NC) chairman Farooq Abdullah had called the Electronic Voting Machine (EVM) "chor machine" while speaking at the rally and demanded that the ballot paper system be reinstated for the sake of transparency.

"The EVM is chor machine. Honestly speaking, it is so. Its use must be put to an end. Nowhere in the world is the machine used," he said.

"The opposition parties should approach the Election Commission and the President of India to stop the use of the EVM and bring back the old ballot papers for the sake of transparency," he added.

Speaking after the meeting with Banerjee over tea, Abdullah said, "Time is short and hence we want election panel to carry out reforms expeditiously for the sake of democracy in the country. Our Constitution is under threat.

"We want free and fair elections. We will never accept if election is held in fraudulent manner," he added.

Stressing that very little time was left for the Lok Sabha polls, Mr Singhvi said: "We are not asking for returning to the physical ballot system immediately".

The VVPAT system should be enforced for proper verification of the ballots, he said, adding already four European countries have gone back to the use of physical ballot from EVMs.

Mr Mishra said there were reports of EVM tampering in the recent state assembly elections in the country.

"Hence, we believe it is necessary to go for electoral reforms".